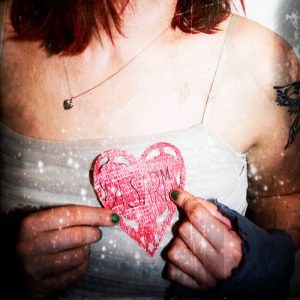 Released on December 4, 2015 via Bandcamp

She Makes War is back. Though it’s questionable whether Laura Kidd has ever been away, such is her presence within the DIY music scene. A relocation to Bristol from London hasn’t slowed her down. She’s still playing shows, conducting workshops, appearing on panels and generally being a terrific ambassador for musicians and Schnauzer owners everywhere. And she’s still writing music, though Disarm:15 is full of recycled recipes, being as it is a direct homage to her debut album Disarm which first drew breath in 2010. With fresh full release Direction of Travel on its way, this EP offers an update on where Laura’s heading.

‘Scared to Capsize’ was the standout track six years ago and it still is here; an extraordinary cocktail of uke, harmonics and sheer snark whose additional drumline offers an even firmer kick to the crotch of any man who has dared to piss her about. But the biggest surprise comes in the renewed form of ‘Ghostsandshadows’ which has been transformed from a percussion-heavy dream pop ensemble into something not out of the scope of Cat Power or Warpaint. In fact, the gorgeous string underlay reminded me most of Eels’ live reworking of ‘Novocaine for the Soul’, as featured on their Live at Town Hall release.

The five songs Laura has selected to rework will be familiar to anybody who has seen her play. However, this record isn’t merely preaching to the converted; opener ‘Slow Puncture’ is very familiar. But this is simply a consequence of it being one of the meatier tracks on the original, and that’s the vibe being offered here. Disarm:15 is a veritable buffet; a mixed grill in shape and character that leaves you happily sated yet heartily looking forward to the next instalment.