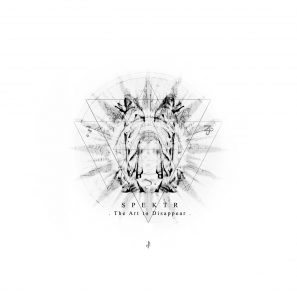 Released on January 29, 2016 via Agonia Records

The Art to Disappear is the fourth album by French noise mongers Spektr, who describe themselves as an experimental black metal band. However those looking for any semblance of the genre (traditional, avant-garde, hipster, A.N. other) will be left disappointed, but those of an industrial persuasion will find much to savour in the furious mechanised death metal inspired riffing and swirling electronic soundscapes.

The latter is what kicks off proceedings with ‘Again’ being the first of many short interludes that pepper the album and this is one of the better ones as it encapsulates the scene with horror movie atmospherics featuring movie dialogue (think Rob Zombie cut offs). This leads into ‘Through the darkness of future past’, which begins slowly with off kilter power chords and sporadic drumming before exploding into a torrent of symphonic death metal reminiscent of Dimmu Borgir-style death metal RIFFS and squalling industrial guitar leads that loop around in hypnotic cyclical fashion.

After another suitably creepy interlude, ‘From the terrifying to the fascinating’ bursts into life with several minutes of fast n furious death metal styled riffing and bursts of harmonics that is abruptly brought to a halt midway through to be replaced with electronic ambience, a side helping of dubstep and a dash of jarring piano chords for good measure. This itself is then abruptly interrupted by the return of the metallic riffing while ’That day will definitely come’ repeats this trick, but in reverse starting with a low frequency pulse and electronica before launching into the now textbook death metal RIFFing. In fact for a few brief moment the two competing styles actually combine together.

Bookended by further dispiriting ambient interludes, ‘Your flesh is a relic’ barrels into ferocious death metal territory for the majority, but is once again interrupted by voice samples and an oddly intrusive 8-bit techno in the middle before culminating into mid-paced chugging.

Finale, ‘The Art to disappear’, is a fitting finale in that it encapsulates Spektr at their best and worst, beginning as it does with further ambient meandering that achieves nothing eventually giving way to their best as the disjointed riffing gradually builds in momentum before unleashing into a torrent of superb full throttle trash metal. But nothing great lasts forever as they opt to drop into an elongated ambient noodling session to close out meaning The Art to Disappear (both song and album) somewhat ironically fizzles outs with a whimper rather than a bang.

Plenty to enjoy overall especially when they break out into the metallic RIFFING as they can blast with the best of them, however the over reliance of ambient interludes stalls any momentum they create over the album.