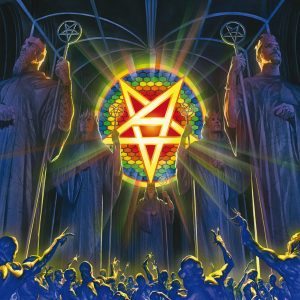 From the so-called “Big Four” of thrash metal, namely Metallica, Megadeth, Slayer and Anthrax, the latter has always been somewhat of an outsider band. Of course, Scott Ian and co have been instrumental in molding thrash metal as we know it today. However, they were different. Scott Ian and co always opted for a comic type of imagery and they actually had a good time when playing live and they weren’t afraid to actually show it. Like many of their contemporaries, Anthrax had their fair share of lineup changes, suffered from bad business decisions and have a lackluster album or two in their discography. The last couple of years things are on the up and up in the Anthrax camp. This clearly shows on the band’s latest album, entitled For All Kings.

In terms of style and musical direction the new album is pretty much a continuation of what Scott Ian and co did on Worship Music, the band’s previous album. They took the best elements of the John Bush-era and spiced it up with thrash metal elements from Spreading The Disease and Among The Living. On previous albums there were always one or two lesser inspired moments, which prevented We’ve Come For You All and the earlier-mentioned Worship Music from becoming true standouts in the overall Anthrax back catalogue. Luckily, this is no longer the case on For All Kings. This time around literally every track hits the mark.

Variation and imaginative songwriting are the key elements. Take ‘You Gotta Believe’, ‘Suzerain’ and ‘All Of Them Thieves’ for instance. Those tracks are a perfect blend of 80’s style Anthrax and the grittier approach of Persistence Of Time and Sound Of The White Noise. There’s also room for more melodic moments in the shape of ‘Breathing Lightning’ and the title track. It’s here where Joey Belladonna gets the chance to show his versatility as a singer and where former Shadows Fall guitarist Jon Donais really shines with his tasteful leads and solos. Pretty much every track on this album is a potential live staple with ‘Monster At The End’, ‘Evil Twin’ and ‘Zero Tolerance’ being chief among them.

For All Kings sees Anthrax firing on all musical cylinders. Top-notch songwriting goes hand in hand with blistering energy and anathemic choruses. This is the band’s finest and most consistent offering since Sound Of The White Noise. Guess I will be caught in a mosh for the foreseeable future.