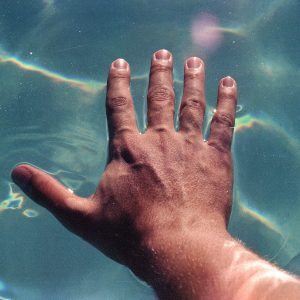 Forming in late 2012, People As Places As People are a not so new band in Post Rock circles, having played with notables such as What The Blood Revealed, and Kasper Rosa. After what seemed like a 2 year hiatus from activity they are back with their début EP. Currently signed to Pedal Pusher Records, their EP For The Time Being is set for release on February 12th. Although spawning only three tracks, it yields a running time of just over 30 minutes, which is certainly respectable for an EP in my book.

People As Places As People are not breaking any new ground within the realm of instrumental music, although, this EP is by no means a haphazard attempt. This release is complete, and comprises everything a Post Rock lover will enjoy in purposefully adhering to the quiet/loud dynamic, but is in no way a one trick pony. It is positively littered with opposing melodies working in accord with each other to reach the same goal.

You will hear moments of beauty, torment, tenderness, and angst. However, still having an overall uplifting undercurrent present in each song. Solid drum fills, and groundwork bass facilitate the proper rhythmic footing that allow the guitars and slightly peppered piano to shine forth. Head bob worthy distorted groovy riffs coupled with clean pedal effects round out a very deliberate sound. What I find most notable is their commitment to allowing the melody to carry itself organically without stifling the current, and not getting ahead of the arrangement. As evident in the long play nature of each track.

Post Rock in its modern manifest is likely seen simply as a convoluted definition of a so called genre that has gone astray, if only by way of redundancy and monotony. For those of us who have been inundated with countless bands following in the footsteps of many groundbreakers, and inevitably copying format and style, I invite you to listen to People As Places As People.

Even though For The Time Being fits into the framework that is the Post Rock prototype as we know it, do not write it off as just another cookie cutter stab at the scene. People As Places As People have clearly taken their time and put their best foot forward in crafting a quality EP and I for one will be looking forward to hearing their further output as they carve out a niche within an oversaturated genre.