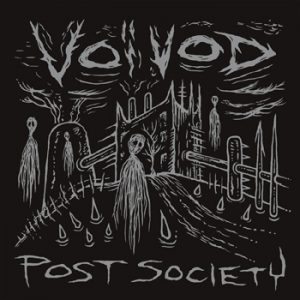 More Voivod? Yes please. Target Earth, Voivod’s last full length release proved that post-Piggy Voivod was still alive and that the band still had plenty to say. The ‘Canadian progressive sci-fi metal innovators’ have released a few new tracks on a five song EP named Post Society. Between Target Earth and Post Society,  long time bassist Jean-Yves “Blacky” Theriault left the band to personal reasons. This EP introduces Voivod’s new bassist Dominic “Rocky” Laroche. Laroche has been touring with the band since 2013 and is involved with the creation of Voivod’s next album.

In the meantime, Post Society will be something for your progressive metal mind to meander through. This EP contains two previously released tracks ‘Forever Mountain’ and ‘We Are Connected’, which appeared on Voivod’s separate split releases with bands At The Gates and Napalm Death. If you have not heard these two tracks this is a great opportunity to do so. I found ‘Forever Mountain’ to be a stunning standout track. As with most Voivod songs… there is a lot going on here. There is that meaty opening riff,  the consistent heavy chugging guitar splashed throughout, the exhilarating and creative bridges, all this while Denis “Snake” Belanger sings with his unique and enthralling fervor. Snake reaches heightened zeal on the song’s final verse: “So here we are, on the roof of the world/ We belong to the sky/ Now we have reached the point of no return/ Constantly flying/ Obstinately crawling/ No choice but to go on…on and on.” The volume of musical ideas that emerge from a Voivod release never ceases to amaze me. The other previously released track is ‘We Are Connected’. It is a completely different beast. ‘We Are Connected’ bounces between frantic dystopian verses and slow eerie and unsettling passages that are steeped in futuristic melancholy. Daniel “Chewy” Mongrain’s guitar solo floats along seemingly oblivious of the dark surroundings. The wicked melodic outro deserves a mention.

Interestingly, the title track and new song immediately thrust Voivod’s new bassist Dominic “Rocky” Laroche intro the spotlight, with a chunky, very “Blacky”, very catchy groove. ‘Post Society’ develops into a solid blast of thrashy metal with Michel “Away” Langevin propelling the track forward with his steady clattering and subtle rumbling as the track rises and falls in pace. Again the bridges are tonally bleak, mystical and full of offbeat energy. ‘Fall’ is a curious, moody and ponderous track. It builds into a jerky robotic stumble with instrumentation starting and stopping, throbbing and pulsating as only Voivod can execute.

The final track is an inspired cover of the old Hawkwind song ‘Silver Machine’. It is Voivod at their psych-space-rock best with tight, with clean performances from everyone. It is no doubt a tribute to the late metal legend Lemmy Kilmister. Voivod sound remarkably comfortable in their spaced-out heavy psych zone.