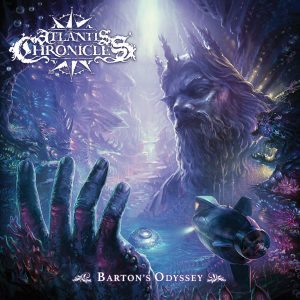 Atlantis Chronicles are a death metal band from Paris and Barton’s Odyssey is their second album and that’s all the information they willingly provide, so let’s dive straight in…

…pun very much intended as if the artwork hasn’t given it away by now they are very much obsessed with the life aquatic. The other aspect the artwork gives way is what they sound like, if you’re expecting the modern styling of progressive technical death metal then bingo, you win a cookie.

A brief character narration introduces proceedings (and will reappear throughout) before the band introduce themselves with a melodic scale workout before hurtling into the above mentioned death metal. Both technically proficient and propelled with a sense of urgency, although they do wear there influences proudly on their sleeve with Between The Buried And Me most notably being the major reference point.

So yes they happily blaze away in a blizzard of fretboard histrionics, staccato riffing, swirling melodies and dynamic rhythms that all turn on a six pence, all kept in the groove by deep growled vocals. While thoroughly enjoyable the first third of the album severely lacks a killer hook or unique spark to leave an impression. Admittedly the second half of second track ‘Otis Barton’ attempts to improve the situation with a few neat flourishes, however is hampered by the cringe worthy narration that closes it.

Happily there is an upswing in fortunes with the arrival of the two-part ‘Upwelling’ that sees the band slowly spread their wings by incorporating clean vocals, sharper RIFFS, more expansive dynamics and post-metal soundscapes (although with the aquatic theme obvious parallels can be drawn to The Ocean). This carries on into ‘Flight of the Manta’ and ‘I Atlas’, the former contains a delightfully vicious central RIFF, while the latter provides plenty of bang for your buck in the HEAVY stakes.

Finale combo of ‘50°S 100°W’ and ‘A Modern Sailors Countless Stories’ are no slouches either, the former keeping the high tempo going, while the latter is a suitably grandiose cinematic conclusion.

It’s definitely an album to persevere with as while initially treading water it opens up spectacularly after several listens.