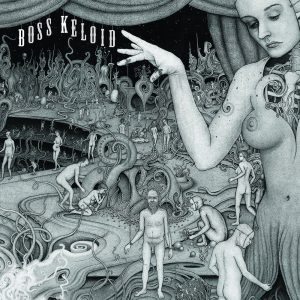 Boss Keloid are a four-piece sludge train based in Manchester… that’s the mundane fact out of the way. The fun part is that this lot have a sound that’s sporadic and uncompromising. Their debut The Calming Influence of Teeth is what you’d get if you mixed Mastodon and Soundgarden riffs and grooves (a bit Louder Than Love and more Badmotorfinger), played by Botch and with a good slab of Melvins-influenced vocals. The album remained fluid even when it kept slamming against different walls of its padded cell, never once losing its steamroller momentum. It was fat, beefy and immersive.

So how have Boss Keloid done about two and a half years down the line and James Plotkin (Khanate) mastering their second album? Very fucking well.

There is a slight shift in sound on Herb Your Enthusiasm. Where there was that craze in The Calming Influence of Teeth, this is more of a drugged, psychedelic experience with a sense of enlightenment through nightmares thanks to a general slower pace and twisted OM influence.

One new thing the band (or Paul Swarbrick) has brought, which is the first thing you hear with ‘Lung Mountain’, is the organ-like effect on guitar – think of something similar to the intro of Sleep’s single ‘The Clarity’. It’s a small detail, but is a fantastic addition to their sound. This especially works on moments in the track when it joins Ste Arands’s steady, brooding drums and Alex Hurst’s chant-like vocals; before transitioning to Keloid’s signature distorted riffs and grooves reinforced with Adam Swarbrick’s thick bass. During the latter half, we also get supportive vocals from Conan’s Jon Davis and Chris Fielding, both adding to the monumental flair of Alex’s. It’s huge.

Due to the song lengths (generally between 3-to-9 minute marks) and Boss Keloid’s ADD nature of constantly switching up during their songs, there’s a lot to mention, too much without becoming a full essay. ‘Haarlem Struggle’ is one of the key examples of this with the band constantly ploughing through different passages and seldom revisiting them. Alex’s vocals soar over the band’s instrumentation for the most part, until a double-bass break comes in and then the song launches through an unpredictable tirade of shifting grooves. You just have to listen to it to understand.

Other songs on this album like ‘Cone’, which could put Crowbar into groove retirement, and ‘Elegant Odyssey’, which is probably where the Melvins influence shines through the most, thanks to Alex’s delivery and the band’s general moody, psychotic vibe with tight yet playful synchronisation. ‘Hot Priest’, the closer for the album, is an almost 9-minute track of utter sludge chaos. Paul’s guitar is especially meandering and twisting (the Botch comparison earlier will make sense here) and the band as a whole manage to keep up the heavy sound, no matter what happens… and so much happens. So, so much.

In a very unprofessional way, this review would have been easier to write if I wasn’t happy enough just to listen to the first track on repeat, let alone ten stellar tracks that each feel like a soundtrack to an adventure across individual different lands and situations. No review will do it justice, it just won’t. If you love your sludge to go down untrodden paths, that’s playful with melodies and heavy riffs, and creatively bonged out: Herb Your Enthusiasm.