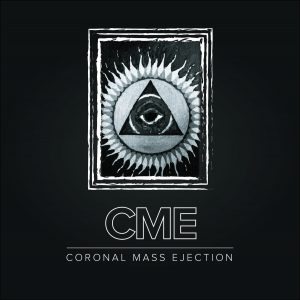 Released on February 2, 2016 via Bandcamp

Coronal Mass Ejection, a trio from Philadelphia, have made quite a splash among instrumental music fans of all sorts since the release of their EP, aptly named EP. Its masterful blend of Post-Rock, Doom, Mathrock, and spacey psychedelic music catches the ears of fans from all genres.

Our half-hour journey begins with the one footstep that is ‘Intra’, a noisy and harsh minute of dark ambience and doom influences shining forth. Already, you can tell this is a fantastic voyage across a mix of genres.

The tone changes dramatically once ‘Origin of Species’ begins, with heavily reverberated guitars take centre stage, mixed with mathematical tapping and fingering. Other layers are gradually introduced, each of them sounding like a different modulation to the time signature to the point where any math-head would piss themselves trying to make sense of it all. The intense texturing of the guitars with its reverb and distortion turned to 11, it makes for a muddy sound like I’ve never heard before. If Post-Math-Sludge didn’t exist before Coronal Mass Ejection, well, it fucking exists now. I became particularly impressed when they managed to fit in a guitar solo that didn’t feel completely out of place.

‘Acquired Immunity’ is once again a drastic change of pace, delving into most post-rock like sounds, with repeated riffs while the bass creates the melody. And just when you think you’re going to be annoyed with the repetition, they go back to the heavily layered sounds of Post-Math-Sludge with several time signature modulations all occurring at once. I tell you, no matter how many times you try to wrap your mind around it, it is never grasped fully, and it never gets old.

The rest of the album continues in pretty much the same manner, but I must be honest and admit I’ve run out of ways to say how awesome this EP is. It’s only 5 songs and 27 minutes, and it’s absolutely mind-boggling how much they accomplish in that space. You’d think it’s a quintet, with how big their sound is.

Coronal Mass Ejection aren’t making it easy for new bands. Having formed just last year, releasing such a strong EP shortly thereafter cruelly raises the bar for everyone else.