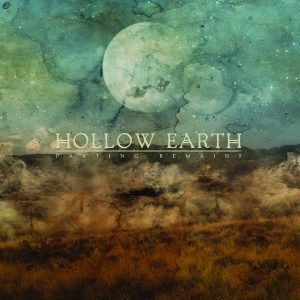 Hollow Earth have been creating some interesting metallic, hardcorey, sludge-ish music. They’ve recently signed to Good Fight Music and released a 3 song EP, Parting Remains, on January 29th. Parting Remains is an interesting offering. It’s got many elements stirring around and you’re sure to hear something you recognize. However some of these elements appear only fleetingly, like flashes of lightning.

‘No Equilibrium’ starts off strong and showcases some of the technical skills of the band members. This song contains the only fast portion in the EP, which is fine with me because I don’t think they need speed to get their point across. ‘No Equilibrium’ has some interesting interludes between riffs, where the music illustrates chaos and mirrors the story in the lyrics; very tasty hammer-on/pull off flurries with the drums locked in step. The song finishes with a fantastic and explosive ending, then fades away as the next song fades in.

‘Beyond Celestial Limits’ is the command ship of this small fleet. While it does begin quietly, the music opens up in an unexpected way. They make, what I consider to be, a very smart decision by slowing the pace. Hollow Earth has a good sense of when to apply a “less is more” approach in this song. They’ve created power and heaviness in the spaces between riffs – like musical dark matter. The best riffs on the EP are in this song, conveying both the hugeness of the tale they are telling and the emotions they are sharing. I can almost see the stars passing me by as the song plays. ‘Beyond Celestial Limitations’ finishes with another powerful ending and shrinks away.

‘Terminal Vestige’ arrives like a sunset, with a melody played on a lone guitar for almost half the track time. There are some other ambient sounds to help illustrate emptiness throughout the EP, but it’s more noticeable here. Again, I am impressed with their pacing and appreciate their willingness to step back and let the song be still. This track is simpler and I think it fits with the subject matter: we’re hearing about a desolate Earth, whose inhabitants are left to collapse into self-extinction. This is a quick, punishing track and swiftly ends the EP in a vacuum.

For all that I like, I think the bass is nearly lost in this mix. It just wasn’t palpable to me. I also think the vocals would have benefited being mixed slightly behind the guitars. There are moments when I have a hard time pulling the guitars out from underneath the screams. I like the style, though – enunciating while screaming can be a challenge. I think the clean guitar tones could use more beef on the mids and lows, but I’m not terribly bothered by it. Regarding the drums, I would have liked maybe a bit more fullness in the kick, but that’s being nitpicky.

Parting Remains is a story-driven collection of songs. On Good Fight’s Bandcamp page, you can find lyrics to the songs, as well as a prologue/introduction, however they’re not necessary to enjoy the music. I’ve seen Hollow Earth before and have had the pleasure of sharing a stage with them. I‘m excited about the direction they’ve taken with Parting Remains. Hollow Earth are creating, and attempting to deliver, a complete package that you’d more likely see from prog bands: a smart concept of dystopian Sci-Fi and metal that culminates in a singular experience not offered by many bands. I can’t wait to see what they do in their next full-length.