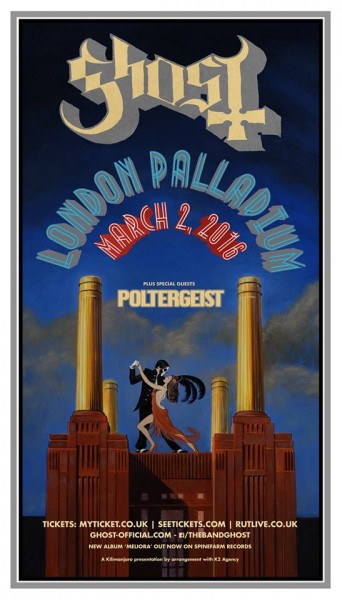 Fresh off their triumph at this year’s Grammy’s, Swedish doom metallers Ghost returned to London for a one-off special show at the London Palladium. Ghost have, since their inception, always been something of a cult act, but tonight’s setting somehow seems to amplify that feeling even further with excitement running high throughout the packed theatre. Before we got to see a Ghost however, we had an encounter with a Poltergeist. You could see why the instrumental duo were chosen for the support, because their ambient and atmospheric style very much suited a seated crowd and they were similar enough to Ghost’s style to get a decent response but also offered something a little bit different for us to indulge in. Their music was interesting enough to start with, comprising a variety of drum parts and an extensive use of pedals and effects from the guitarist. But after a little while it all became very tedious and the lights of hundreds of phones throughout the audience bears testimony to that. It would have been far easier to appreciate them though, were it not for the fact that the longer they played the more it was possible to pick up on samples of music that the two musicians definitely weren’t playing live. At first I thought the guitarist was just making use of a looping pedal (which perhaps he was), but when I heard bass lines and drum beats, which very clearly must have been recorded it made me wonder how much the guitarist was actually playing himself; not to mention what the point of having two band members was if that was clearly insufficient to achieve the sound they wanted. To quote the guy next to me: “They might have been quite a talented band. It just would have been nice to have seen them live.”

The less-than-enthralling support act, the lengthy waiting time in between and the overly-long introductory church music before Ghost finally did take to the stage was either incredibly frustrating or an act of genius, which helped produce the most enthusiastic of welcomes from the crowd inside the Palladium. There is perhaps an even bigger cheer upon the arrival of Papa Emeritus III as he appears in full mask and cardinal outfit to commence the set with ‘Spirit’ from their most recent album Meliora. This was promptly followed by ‘From the Pinnacle to the Pit’, which is when the show really got started, in my view, with its catchy grooves and melodic lifts summing up so much of what is good about Ghost and completely setting the tone for the evening. It was when they went into their third track, a lesser-known song from their début album called ‘Stand by Him’ though, that I knew that this was going to be a special night. Even though this song is firmly rooted in the back catalogue, it felt as though the whole crowd knew it, loved it and was singing along to it. Metal singalongs aren’t exactly standard practice, but then again nothing about Ghost is particularly standard; and it’s this kind of thing which gives them their cult status and why they’re one of the biggest acts in the scene at the moment despite only having three albums to their name. I mean let’s face it, how many other bands do you know who could get their entire audience singing along in Latin (‘Per Aspera Ad Inferi’)?

When it was announced that Ghost were going to be performing at the London Palladium, I must say I expected something of a spectacle. And to some extent that’s what they delivered, though I would say no more so than usual. The pseudo-stain glass backdrop, the costumes, the masks, the unholy communion during ‘Body and Blood’ and Papa Emeritus III swinging a ball of incense are all obvious spectacles, but they’re also staple parts of a Ghost show. It was not so much what they could bring onto the stage however, as what they were able to achieve with an almost empty one. What made this show so special was the fact that the setting meant that there were to be no distractions from their music; something which not all bands would necessarily welcome, but Ghost just thrive under it. Every song sounded identical to the record and even Papa himself sounded crystal clear whereas before I’ve found that his voices is somewhat obscured by his mask. Whether they were performing hidden gems or their best known tracks, they just nailed it every time, and the audience responded with all the enthusiasm that the performance deserved; singing at the tops of their voices to ‘He Is’ one moment and headbanging away to the Grammy-winning ‘Cirice’ the next.

I’ve often found it rather difficult to justify exactly why I am such a big fan of Ghost to people who don’t get them, which is a difficulty I rarely experience. That was until I saw this show however, because it just epitomized what makes them so special. They are one of the best bands around for doing simple things well. And this extends to every aspect of their performance. Every one of the nameless ghouls were spot on musically speaking while Papa just seems to glide around the stage commanding it with ease. The fact that they were able to do so much with almost an empty stage speaks volumes to how well thought out their show is. The lighting wasn’t exactly spectacular, but yet it noticeably added to every song and every time a nameless ghoul moved around the stage it appeared to be done with a deliberate purpose. The best example of this for me was their cover of Roky Erickson’s ‘If You Have Ghosts’ (performed as an acoustic song in this instance and elongated so Papa could include a spiel about the band). Again this was something which was so simple and yet so very effective, with the whole audience once more in singalong mode which persisted right until the end with fan-favourite ‘Ritual’. The whole night felt very much like a ritual for that matter. If Ghost really are Satan’s church then we were their choir. Only the encore was left now and even this was out of the ordinary as the nameless ghouls departed and Papa remained to talk to us all about orgasms for five minutes before ‘Monstrance Clock’ closes out the show, as it always does for them. In many ways then, Ghost’s performance at the Palladium was a simple and predictable one. But in no way did this make it anything other than a truly special experience for those of us who were lucky enough to be there, and I could not hear anybody from the audience say anything to the contrary as we filed out of the theatre. I’ve even had the privilege of seeing them before, so I expected them to be good. But all the same, the acoustics of our setting and the performance they delivered exceeded all expectations making this one of the best live concerts I’ve seen in a long time.