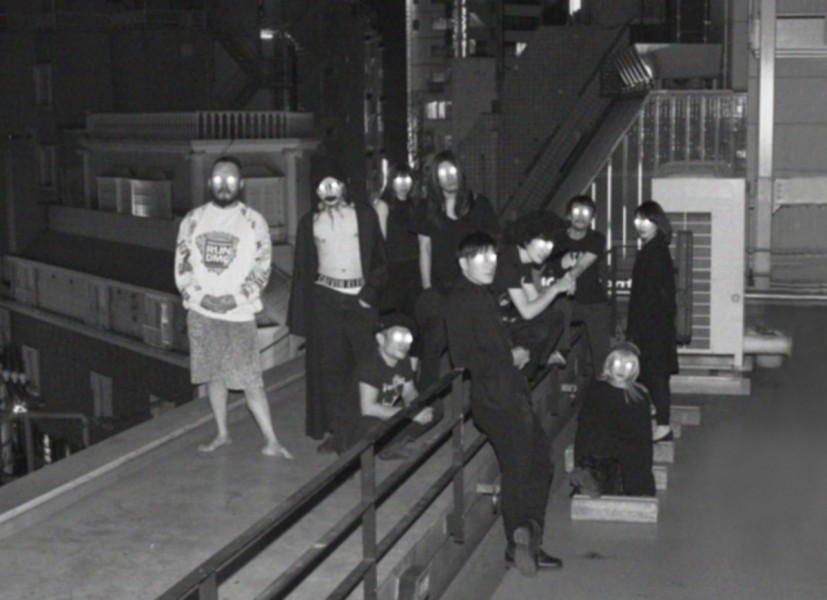 Balance is typically sought by finding a line down the middle. You can have too much of a good thing and even more often too much of something not as good as you first thought. That second time you watch a movie or the third season of a comedy when you realise it was all a sugar rush. Moderation, it would seem, is the key.

So a year after losing my Vampillia virginity when I saw two shows at The Tote, I wondered how I’d respond this time to the excesses of the band, especially given they would have their ten-piece set-up (nine of them on stage). Would I still be awestruck by the theatre of the performance, or would a degree of familiarity reveal an underlying lack of substance?

The band was in Australia in the main to support Godspeed You! Black Emperor at the Adelaide Festival, and they took the origins of that band’s name to heart by creating a b?s?zoku bikie theme, complete with tokk?-fuku outfits that the males of the group shed as the show continued.

Vampillia can’t just walk on stage – instead they confound and confuse with introductions that make you laugh and get that adrenaline pumping. Crazy shit. The spectacle had began, building the chaos for five to ten minutes only to flick the switch and turn on the dopamine as they turned their minds to the sublime ‘Some Nightmares Take You Aurora Rainbow Darkness’. This was followed by the song that sums up the light and shade of Vampillia – ‘Ice Fist‘ (or ‘Fedor”’,which is the version on the other Nightmares album), and it was at this time the sheer power of two drummers with full kits (with Yoshida Tatsuya on one), keys, synth, bass, harsh and operatic vocals and three guitars really hit. This is an incredible bunch of musicians.

There was theatre. There was despair. There was fun and silliness. And yes, there was balance. But moderation was not on the agenda as we swung violently from loud, brutal, screaming chaos to absolute peace and serenity. Just as the only way to make a fighter plane more manoeuvrable is to make it more inherently unstable, a Vampillia performance doesn’t stand on the cliff looking down, it grabs you tightly by the arm and leaps off the edge, unfurling its wings seconds before smashing onto the rocks below, and carrying you safely into the clouds.

The main support for the headliners was Melbourne post-rock favourites Laura in their first show for a couple of years. Rather than declare it a one off return the band continues to leave things in the air, but on this occasion it was more of a reunion with Vampillia who they had played with in Osaka in 2008, and tonight they played ‘We Should Keep This Secret’, which they had not performed since then (or it could have been ‘We Are Mapping Your Dreams’, which they also played).

It was a good long set reaching back into the songlist and up to the last album. There was plenty of that guitar assault we’ve come to expect and the cello turned up nice and loud. Oh fuck that cello is sublime.

Despite the intense moodiness and despair of ‘This Grey Earth’ and what became the go-to set-closer ‘Mark the Day’, I didn’t get a sense of sombre seriousness from the band or the crowd. There was a technical issue that took a long time to fix with a fair bit of distraction from one of the sound guys on stage and the loss of keys on a few songs, so it wasn’t the best performance I’ve seen from them. But that was made up for by the feeling of a warm-up set with a friendly and familiar crowd.

Yoshida Tatsuya’s solo act Ruins Alone is unlike most drumming you would have ever heard. Playing to minimalist synth tracks on his laptop and adding bursts of indecipherable vocals, Japan’s master of underground drumming dances across the kit with chaotic precision.

This is not three or four basic patterns repeated with the occasional flourish, these are intricately calculated and scored short pieces played one after another with minute attention to detail. Although the Magma influence is there, it’s a whole different game when drums never take a back seat to other instruments. OK, so you wouldn’t listen to this in the car or to help you get to sleep, and I wouldn’t have wanted a set twice as long, but it’s a live spectacle that is well worth catching.

The night was opened by Melbourne stoner duo Hotel Wrecking City Traders, who played somewhere between one and three songs (there were no real breaks), that consisted of pulsating guitar riffs and loops over a solid bed of fluid, wandering drums. Without much in the way of melody, but moderate to well paced rhythm, it felt like improvised psych rock with hints of acid, space and sludge. However you describe it, it’s music to get swallowed up by and tune out to, and would respond well to preparatory mind-alteration (I do miss those days when I hear bands like this).

So back to that balance I was talking about. The mix of styles over the first three bands prevented the feel of the night from gravitating in one direction. I’m sure those who prefer to hear one specific sound over a night might have found it frustrating, but seeing the crowd who was there confirms there is a big enough pool in Melbourne of those who like to see the boundaries pushed in a number of directions. In any case Vampillia took that diversity and magnified it with their explosive and entertaining set.

I just hope they come back again soon. Bands like Vampillia are keeping live music interesting.