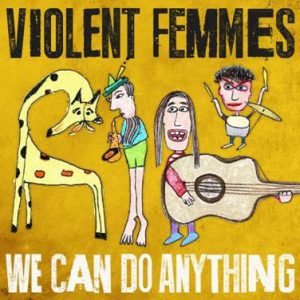 I want it to be made extremely clear before I start the actual review that there is no bias here; but I should declare that a little pride is unavoidable. Tassie pride, to be exact. This comes from the fact that Brian Richie, the bassist for the legendary Violent Femmes, is an adopted Tasmanian (that little island below Australia. No, not Antarctica!), having moved here a few years ago to assist with the Museum of Old and New Art (MONA). So there may be pride, but no bias. I promise!

Right, now that’s out of the way, on to the review. We Can Do Anything, the latest effort by The Violent Femmes, is… okay. That’s it?! After all that, only okay?! Sadly, yeah. Not bad, but not exactly great either. Fans of the Femmes will be happy, but it is unlikely to woo those left previously unimpressed.

The first studio album from the band in 16 years, We Can Do Anything is a pretty good reminder that the Femmes still got it. After a gap that long, longtime fans will find it heartening to hear a sound that is, at its core, very Femmes. They have a unique feel, and that is very clearly here. The distinctive twang of Richie’s bass, playing the strings like rubber bands defines tracks such as “Holy Ghost” and “Foothills”. Gano’s delightfully brash voice will be welcome to fans of “Blister In The Sun” and “Crazy”, harking back to their first album on “Issues” and “I Could Be Anything”. It’s certainly a Violent Femmes album.

But it’s a good thing it has that distinctive Femmes feel, because it doesn’t really have much else. Those looking for a new sound from the trio will be left wanting. 2016 Femmes is near identical to 1980 Femmes, albeit older. We Can Do Anything, they say; except innovate, apparently. Which is unfortunate. 16 years between studio albums should be long enough for a sound to evolve, and it is on this front that the Femmes have failed. I mean, just look at Swans; dormant from ’96 to 2010, they completely reforged their sound. We Can Do Anything is an album based on nostalgia, rather than a genuine desire to progress musically.

Ultimately, the question of whether you will like We Can Do Anything comes down to whether you like the Violent Femmes already. It’s unlikely to ensnare a new generation of fans, and I’ll also be surprised if it wins over those who weren’t sold on the Femmes on their back catalogue. I doubt anyone who doesn’t already like the Femmes will listen to their latest and say to themselves, “well, this album really is what got me into the Femmes.” It’s just not that type of album. It feels too revival-y, like a victory lap.