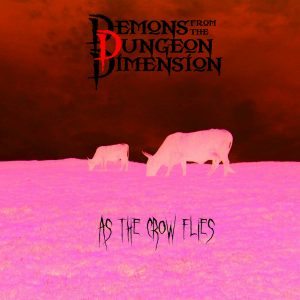 “In the year that western mortals refer to as 2010, the volcano of Eyjafjallajökull erupted violently in the area you probably know as Iceland (also referred to as Eylenda, Fjalladrottning, or Garðarshólmi). What few of you know is that this opened up a passageway to the centre of the earth; a gateway to the Dungeon Dimensions of the underworld, or Hell.”

So begins the legend of Demons From the Dungeon Dimension. It’s pure heavy metal silliness, but said with just the right amount of tongue in cheek so as to not be taken too seriously. More importantly, the music fits that description. Hailing from rural KwaZulu Natal near Durban, South Africa, Demons From the Dungeon Dimension (named after a Terry Pratchett reference from his book Eric) is a one-man band responsible for this hellish combination of stoner, doom and sludge metal (with a heavy classic rock side to it, too).

This debut album, As the Crow Flies, kicks off with a stoner rock track by the name of ‘Black Dragon’. With a slow build-up starting from some acoustic guitar harmonics, this is a perfect choice to introduce the album. It doesn’t kick you in the face right away; instead it chugs along, gradually gaining in speed and intensity. There is not a single transition or change in pace that feels unnatural or forced, which displays an impressive maturity for a debut album. The song never really ventures into ‘metal’ territory, though, having much more in common with, say, Queens of the Stone Age than it does with Electric Wizard.

However, it leads perfectly into the heavier second cut, ‘Raising Hell’. This was the first song released from the album and it’s an absolute monster. Utilising a faster tempo and heavier, catchier riffs, this is undoubtedly the record’s most memorable song. The vocal melodies really work well alongside the chugging elephant-stampede riff that accompanies them during the verses. The song later changes course, breaking into yet another heavy-as-hell riff that drives it home to its epic conclusion. While As the Crow Flies features its fair share of variation and memorable tracks, it’s hard to argue against ‘Raising Hell’ being the out-and-out album highlight.

‘Scales’ is a riff-fest, bringing shades of grunge and alternative rock into the mix, which only makes the start of the song that follows it even more jarring. The title track wastes no time in getting to the point, with a high-pitched wail and tremolo picked riff signalling the first sign of black metal influence on the album. The first half of the song is the darkest on the album, but the second half breaks into a Siamese Dream-era Smashing Pumpkins section that seems to end things on a mellower note. However, the screeching vocals and metal riffs make a brief and unexpected return to lead nicely into closing track, ‘Lament for the Fallen’.

‘Lament for the Fallen’ is the most traditional-sounding doom song on the record, with a slower-than-molasses riff occupying most of the track’s 8 minutes. It is based on a J.R.R. Tolkien reference, specifically regarding his notions of heroism, and is influenced by ‘Lament for Boromir’, which is sung during Boromir’s funeral in the novel. The smooth vocals work well in this setting and seem much more comfortable here than in some of the faster-paced numbers. Again, everything progresses in a very natural way with regards to the song structure and pacing, giving everything a wonderfully cohesive feel to it. A couple of well-placed heavy-psych solos bring it all to a very satisfying conclusion and ensure that As the Crow Flies goes out on an epic note.

Demons From the Dungeon Dimension have crafted a record that will hopefully bring some much-needed attention to the small but burgeoning doom metal scene in South Africa. While it may not be perfect, especially due to the production (everything was recorded with a single mic, including drums, and there is no bass on the album), As the Crow Flies is certainly one of the most impressive debut albums to come from this scene, and it is reasonable to assume that there will be much local interest from fans who will already be eagerly anticipating their next serving from this cauldron of sludgy, lo-fi doom.