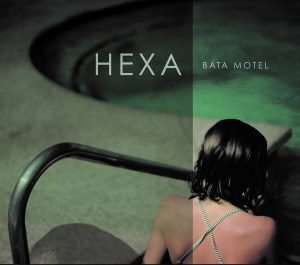 Released on February 8, 2016 via Bandcamp

What does music mean to You? If any soul were to ask me that question I could only ever answer with one word. Lifeblood. I wake with pieces of music lying in the undercurrent of every breath. Even in casual conversation I find my mind subconsciously inserting lyrics or melodies upon the slightest trigger word or phrase uttered by another. In even the most remedial of forms, in my opinion, music is intended to be an outlet for the artist and provoke an emotional response from the listener. Good or bad, at the very least we are affected. Affected is the easiest way I can describe Hexa’s (Carrie Gillespie Feller) 4 track EP titled Bata Motel, which was released independently on February 8th of this year.

Although this review is severely postdated in relation to the original release window, it was suggested by, vouched for, and recorded on, by a respected member of our Echoes & Dust community. So I figured, what the heck, it’s not my normal cup of tea but why not. What I encountered was songwriting at its best. No, not the cookie cutter radio friendly crap, but that which provokes a reaction that is altogether primitive and on the forefront of everything that the general public is scared of.

This will NOT fit into the pony tail bobbing, depthless, and socially acceptable murmur of contentment in taking what we are given from “Big Radio”. Yet Bata Motel is still pop to the core. However stark and despondent it appears on the surface. Catchy hooks prosper. Stylized vocal inflections are inserted at will. There are so many differing soundscapes. Those that force you into a sense of introspection and begrudging angst. They vary from piano logging in multiple concurrent melodies with flagrantly distorted guitars, and wraithlike dreamy vocals contrasting with foreboding background spoken word that alludes to an internal battle of the ages.

As a whole, this is music that makes you uncomfortably warm and fuzzy, and forces you to take heed. Carrie’s lyrics are rife with life experience and ordeals beyond what should be expected from life. However, she has triumphed in allowing her experiences’ involvement to take shape in what we are hearing on this EP. Most of our readers are akin to the subversive elements of the non-mainstream music we all take in. But I implore you all to share and support Hexa, as she has so much to say in both her music and lyrics.