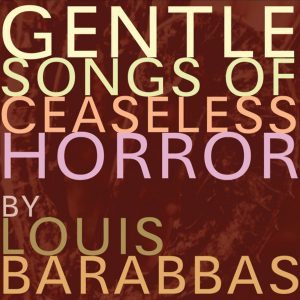 “Morph me into a fiction, rearrange my life so it fits” sings Louis Barabbas; a once-snarling “Fagin-Nymph of Dirt Swing” come clean in his new solo album Gentle Songs of Ceaseless Horror.

It’s easy to understand the lyric – Barabbas clearly belongs in a fantastical, twisted wonderland – far more suited to fairytales than the dull reality of the every-day. His latest LP is a theatrical delight of dirty, understated swing diffused with sardonic phrases and lyrics.

The opening track, ‘A Matter of Life or Death’, immediately sets the scene with a deep, moody bass line accompanied by lilting guitar and vocals. Louis’ lazy, almost-spoken vocals drip with dry humour and sarcasm – demanding ownership of his songs and style. It’s a simple, effective arrangement throughout; driving bass lines, fingerpicked guitar and modest vocals punctuated by brass sections and the occasional Fender Rhodes.

‘You Did This To Me’, one of the singles off the album (with a thrilling video to match) is a great example of how this instrumentation works so well. The gentle, funky guitar and bass support the song’s accusatory storyline (“You did this to me, lifted the veil off your intent”). Halfway through, the music explodes into an instrumental break down, with expansive, long notes and is then almost-immediately sucked back up into the original groove. It’s playful, but dark, and just as erratic as its creator.

Barrabas’ lyrics are a source of endless humour and wonder. They’re dry and quick – sometimes almost thrown away – but hold a deeper, more profound meaning. The album, which Louis describes as a collection of “existential ghost stories”, follows the songwriter’s ramblings and soul-searching – “I’m a tick, awaiting it’s tock” – and reveals his extensive musical ability and prowess.

I would love to watch a Louis Barrabas musical, with Tim Burton-esque design and production. His videos themselves are works of art; unsettling and cryptic, but above all, spectacularly artistic and entertaining.

Louis says the songs were written alongside his usual output for band The Bedlam Six and that for “every erratic foot-stomper” there was a “slightly malformed wordy afterbirth”. He’s being modest – Gentle Songs of Ceaseless Horror is it’s own creature. It may not be snarling, but it’s got one hell of a character.