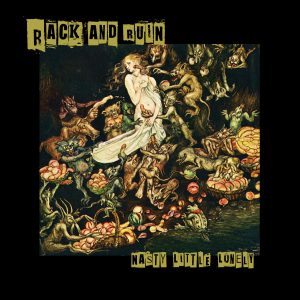 Rack and Ruin is the debut album from Bristol industrial post punk outfit Nasty Little Lonely and is a superb follow up to the two very impressive EP’s released back in 2014; Son Of The Flies and Bad Jack & Other Stories.

NLN certainly haven’t been slacking in the intervening time period as seven of the nine tracks on offer are brand new material plus they have refined their sound considerably, still retaining their trademark “industrial post punk noisy stuff” identity but with a far darker and aggressive edge as the electro funk elements have been toned down while the abrasive industrial is dialed all the way up to eleven.

Opening track and lead single ‘Pound of Flesh’ cranks the machine into gear with driving discordant industrial riffing backed by a foreboding mechanised bass rumble that is amplified further by the disorientating Stop/Start/Quiet/Loud dynamic of ‘Say What You Want’, over all this the gothic vocals drip with atmospheric menace.

‘Lizardbrain’ is only one of two tracks to make the selection cut from EP to album, and as well as being one of their more immediate and memorable tunes due to its psychobilly inspired main riff, benefits greatly from the tinkering process emerging as a tightly wound ball of energy. ‘Machinery’ is the other surviving track and has also been refitted with a far more scything tone welded to its pulsing rhythm.

After the slow burning post punk of ‘No Way Back’ we are treated to the cinematic epic of ‘Snake Oil’ as a doom laden clean guitar backs the haunting vocal refrain before the whole enterprise morphs into a swirling maelstrom of noise and is nicely bookended by the jagged psychedelic tendencies of ‘Lick by Lick.

‘The Priest’ is the most straightforward track present powered along by up-tempo riffing and industrial pounding while ‘Dead In The Water’ Is a short sharp punk rock finale to proceedings.