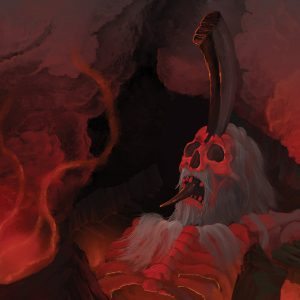 First off, Haast’s Eagled is three-piece experimental doom band from South Wales who have only been going for a handful of years now, putting out their self-titled first release in 2013, which presented a thunderous sound. Now we have their second, II: For Mankind, their first on a label.

Like the debut, you can tell that the trio draw heavy influence from the likes of YOB, Alice In Chains and the heavier side of prog in general, but there’s enough here for it to have its own Haast’s Eagled barcode. Vocalist Adam Wrench spreads his wings a little and experiments with a wider range of styles; from the familiar Mike Scheidt-like melodic shrills, clean singing and growls, but now including droning gutturals, chants, Gira-like moans and more. These noticeably come and go depending on the mood of the instrumentation.

With the first track ‘Pyaaz Bhonghi’, we’re instantly thrown a thick wall of fuzzed-out riffs like the birth child of YOB and Sleep’s Dopesmoker, Lee Peterson’s bass growls at a pulse before Joe Sheephy’s driving drums comes in and syncs them all together. Over the next few minutes, you’re given alternating passages until the 6.50 mark, where this hybrid atmosphere of Soundgarden and Alice In Chains comes up, thanks to interlayered and melancholic guitars and Wrench’s clean vocals soaring above. This slowly works up in intensity and soon the big, distorted riffs come back – coupled with guttural throat singing – before being gently whisked away by a lone piano.

Next up is ‘The Uncle’, which has a similar approach with the beefy riffs that dominate the track but with a slight Saint Vitus edge this time round. The gutturals make more of an appearance and the monumental lead that takes charge before the midway point just fits perfectly over the rhythm section. It’s simply a dedication to riffs.

‘Zoltar’, the longest track clocking in at just over 20-minutes, is one for prog-heads. This is where a Crippled Black Phoenix influence shines through the brightest, especially with the first few minutes of hopeful twinkling piano juxtaposed by morose guitar, joined in later by a very deep chants and moans. Overall, the first half is a soothing breather but eventually the distortion and doom comes back in full force, but still retains that slightly hopeful feel… for a while. The instrumentation eventually lathers itself in a dark atmosphere while slowing to a crawl, but again, the tables are turned and we’re back to the first half’s style, this time with a smooth saxophone crooning before a final injection of riffs.

‘White Dwarf’ closes the album with a very drawn-out and down-beat sound overall; but the sort of feel of resignation you get from Alice In Chains comes through at times, especially with the guitars and vocals, as if accepting any fate. This is actually amplified when the band strips back to the bare bones of an acoustic guitar and Wrench’s cleans at the end. A very haunting ending for such a journey.

In all honesty, this album might be Marmite: you’ll love it or you won’t last the whole way through. It totally depends on how much patience you have, but having that patience is especially rewarding with an album like this. Haast’s Eagled have pushed their abilities and songwriting further, and their experimentation works every time. II: For Mankind is an apt title, a refreshing sound in the gradually over-saturated doom scene in the UK and it’ll be interesting to see where the three go from here.