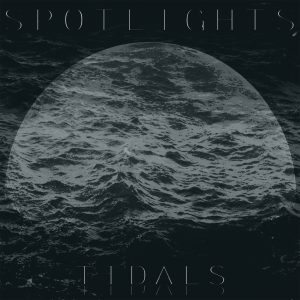 Tidals is an album by Spotlights, the husband and wife team of Sarah and Mario Quintero, out of Brooklyn, NY. This is a follow up to their debut, Demonstration, which will be released on May 13th via Crowquill Records. Tidals is a magical mixture of sludgy guitar fuzziness, with profound synth arrangements and thoughtful songwriting. It results in a shoegaze-like album that sparkles as much as it suffocates.

The intro track is great, but it leads right into the huge and sludgy beginning of ‘Walls’. After the riff is established, the song seems to teeter a bit, introducing unexpected vocals as well as a few other synth and guitar layers. In less than three minutes, it’s gone from heavy sludge to atmospheric shoegaze. While the tempo doesn’t change, the mood and emotion in the song does move around quite a bit. The result is a dynamic environment that pulls you from place to place instead of allowing you to become complacent, or stagnant (something heavy albums can suffer from).

By the time ‘The Grower’ was half-over, I was sold. It’s a thick, heavy track that flexes a multi-layered bicep, offering the listener a chance to dig into the textures. In the later part of the song, we’re offered a fantastic departure from the heavy-handed foundation with an acoustic arrangement. Multiple guitars harmonize, then a crystalline yet dirty guitar melody introduces the build and following outro. Then a spooky vocal arrives to carry the listener away.

The Quintero’s vocals are fantastic; ethereal and sensual. They’ve mixed the vocals slightly behind the music, which I always approve of. This approach allows the listener to become lost in the flow of the music, but lulls them back into a hypnotic, velvety stupor if they try to wrest their consciousness free.

I think the strength in Tidals is the orchestration of the synth arrangements and the songwriting. There is a great balance between the massive fuzz beatings and the contemplative and atmospheric whispers. In quite a few of the heavier moments, the synths weave delicate structures in an almost inaudible backdrop. They also introduce clean, or cleaner, guitar melodies and arrangements in front of the heavier rhythm sections and it does wonders for tonal balance, as well as provides a healthy diversity of texture.

Tidals showcases excellent work of layering several textures atop each other. By the addition or remission of these layers, they create different sonic landscapes within each song’s framework while using what sounds like the same components. Aside from synths, their use of effects and feedback was well-intended and the resulting additions are great. I love their uses of unexpected synth textures and percussion, as well. Also, I’ve read that Josh Cooper provided live drums for the recording. I’m not sure if he is a full-time member, but his instinct lined up well with the Quintero’s vision.

Spotlights have a solid grasp of dynamics and songwriting. Theirs is the music that I’d compare to painting: using similar tools and palette to create multiple, diverse landscapes. While I am not usually one to reference another band in a group’s review, I highly recommend this to fans of Helms Alee. I hear a lot of similarities, but not so much that it overshadows Spotlights’ individuality.

Despite what I said earlier, my only critique would be to have the vocals only slightly higher in the mix. This is strictly subjective, as I want to know what these folks are saying. That being said, I can appreciate the vocals as their own instrument and can deal with a little mystery. Also, there were some moments where the bass was hard to follow, but again, probably my subjectivity at play.

With their songwriting and delivery, Spotlights offer a rather unique departure from typical doom or sludge bands. Likewise of the gaze genres, too. There are a lot of unexpected surprises and interesting approaches to heavy music, and I whole-heartedly approve of that. Spotlights have crafted a fine recording of interesting and contemplative music in Tidals, which causes the time to fly by while listening. Oh, and do yourself a favor to stick around for the last song, ‘Joseph’. It’s simply beautiful.