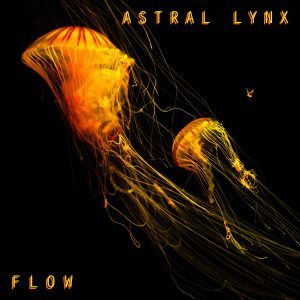 I’ve seen London 4 piece Astral Lynx live a few times without really knowing their tunes, so to have a chance to listen to their debut album in it’s entirety was a chance I didn’t want to turn down!

The opening guitar in ‘Flash Gordon’ would sit very comfortably (numb) at the start of many a Pink Floyd track, and it certainly piques my interest. The drums kick in, the guitar takes it’s own journey with some beautiful playing, and it’s an impressive instrumental making a very encouraging start to the album.

Next track up is ‘Renegades’, where they give us what sounds to me as a Black Mountain influenced song with a riff that teases us that something big is going to happen, but then goes on a slightly subdued journey, which sits with the accompanying narrative regarding space and where we come from.

‘Shaman’ hits us next, with a tribal drum beat befitting the title. It reminds me of Seven That Spells musically- no bad thing – with the vocal harmonies again working well. An Eastern inspired riff works it’s way through and some clever drumming and guitar work takes us on a trip into the jungle, with added effects contributing to the audial illusion.

‘Cocoon’ is a more relaxed vibe, gentle guitars with a voice telling you to ‘relax, breathe in, breathe out, let your body melt into the ground’. I’m sure listening to this at night or in a dark room would have just that effect. It’s a very blissed out song, and almost as you have been taken there, the song stops. An extended remix of this would be an interesting one!

‘Cedar Eyes’ carries on with the relaxed vibe, very Floyd in it’s influence. The vocals don’t really work for me on this track, they kick in when I just want to enjoy the quality musicianship the band obviously have.

Next is more chilled out psych with ‘Rising Sun’, another track with some rather lovely instrumental work, again with a touch too much vocal for my liking, but a decent song nonetheless.

‘Beyond Sahara’ brings some hand clappng percussion into the song, and it works well alongside a very simple drumbeat and guitars that are allowed to do their own thing, along with vocals that aren’t words, just adding another layer of sound. A complete slow down then led me to believe we were on for a grand finale to the song, but it didn’t happen and just petered out, which I felt was a shame from a song that I was enjoying, but didn’t quite kick on.

‘Beauty Within’ didn’t work for me from the start. Wasn’t over keen with the vocals or the words “It’s nice outside, come and see'”as an example of being too relaxed with the lyrics. It’s the one song on the album that doesn’t do anything for me, with both the instruments and the vocals not doing enough. It plods on and I feel myself wanting the track to finish.

‘Cosmic Beast’ is the final track on the album, and as much as I wanted to say that it was, it falls a bit short of being able to live up to it’s name. Just when it starts to pick up, it slows down and goes all Deep Purple ‘Child In Time’. Guitars and drums in time to a military beat come in, then a bit of freestyle shredding and drumming before just after 9 minutes, silence…though there is still 6 minutes of the track left! After 2 minutes of silence there is more music, a solitary chilled out guitar is joined by simple bass and drum, and then the riffs start to build and creates a gem of a tune to end the album with. I would have been happier with all 15 minutes being that as an album closer!

Overall I like the album. It’s very chilled out, ideal for late night relaxing. I’m looking forward to catching them live to see if the songs take a different turn to the way they’ve been recorded.