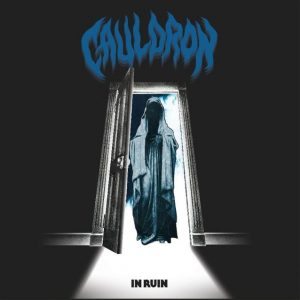 The name Cauldron has been thrown around a lot and I’ve seen it everywhere since I started doing festivals in Europe around 2011. Around the same time I started writing reviews, but as cool as the logo was and the patches, recommendations and endless shares on social media, it just seem to pass me by.

How does this happen, you ask? Well I’m a bit of a stubborn bastard and I tend to not listen to something I have not been introduced to by someone I hold in high regard, which makes me sound like a complete asshole, which would be an accurate assertion at this point in time.

So last night, whilst having a fat chat with a mate who is over in LA, we were talking and we started referring each other releases etc. It came up where I recommended something and he said he’d have to put a pin in it because he’s on a mad Cauldron binge at the moment and I of course confessed and said I’ve never listened to Cauldron, which was met with a link to their latest album, In Ruin, which was released on the 29th of January, 2016 via High Roller Records and The End Records.

Now before we go any further, I was warned about awesome heavy metal riffage, which is where my love for heavy metal comes from, especially the cheesy riffs and vocals that just scream heavy metal worship with a hint of NWOBHM. I mean, who doesn’t love that?

I then  started to listen with some intrigue to what was being thrown my way in terms of the music and well, riffs, riffs and more riffs. Musically, from a composition point of view, I found it to be an excellent, all encompassing classic heavy metal record, which had a variety of soundscapes all compressed into one that just has everything for the heavy metal fan.

The riffs are fantastic and I’ve mentioned it before, but just the simplicity and the solos are off the chain in my humble opinion, backed by solid drumming and the cheesiest 80’s clean vocals filled with nothing but nostalgia. The classic heavy metal band we needed and deserved amongst an era of garbage. In Ruin is a album that will seem like a blast from the past, but they’ve seemed to mould that heavy metal sound and made it their own, so it has a very organic feel to it. Hell, before I knew it I was singing along and air-guitaring all over my room at 2 AM in the bloody morning, even the air-drums got a work out!

Needless to say, I think this is an awesome band, In Ruin is an phenomenal album and an instant classic in my opinion. I went as far as digging my way back through their discography. I am definitely looking to adding some physicals to my collection. Heavy metal worship done the right way! This is in my top 10 for 2016 without a doubt!