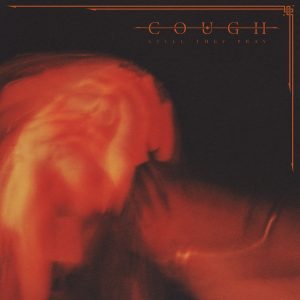 Released on June 3, 2016 via Relapse Records

Still They Pray, the third full-length from Richmond, VA’s Cough, is very much an album of dualities.

The first half sees them slavish in their worship of Dorset doom titans Electric Wizard, whose misanthropic funeral march psychedelia was merely a basis for their earlier work, while the latter half allows them ample space to expand upon the more interesting aspects of their sound.

That the record was produced by Jus Oborn should come as absolutely no surprise when listening to the colossal cosmic horror that is ‘Haunter Of The Dark’, or the fuzzed-out riffs and tortured cries of ‘Dead Among The Roses’, showing that Cough have managed to write better Electric Wizard songs than Oborn himself has in almost a decade.

The opening strains of ‘Let It Bleed’ mark a clear departure from those tracks, and by the time the mournful vocals join in it’s clear that Cough have lost none of their own identity. A perfect encapsulation of doom metal, replete with one of the most emotive and interesting guitar solos I’ve heard for a long time, this is a high point for not only the album, but also the band, and even the genre itself.

‘The Wounding Hours’ is also outstanding, using sustained organ notes to overlay the familiar squalls of wah-wah and howled vocals to unsettling effect, while the clean vocals and acoustic guitar render the closing title track no less sinister.

The clear division of songwriting styles across the album feels somewhat regressive, considering they managed to effectively weld these elements into a cohesive whole on previous LP Ritual Abuse to stunning effect. That said, it does make Still They Pray something of a rarity in the modern age: a fully-realised ‘double album’, and not just a 2x LP comprised of mostly dead wax because a band was unable to reign things in under the 40-minute mark. Thankfully, Cough make use of every blessed minute.