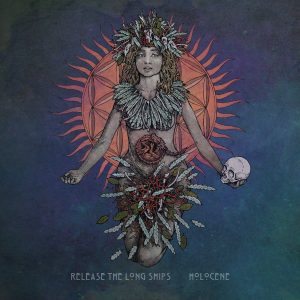 Release The Long Ships has been around for a while, and for the most part I haven’t really paid much attention to it. It’s a solo project of Ferenc Kapiller, and the second most popular band from his home country of Hungary on Bandcamp. It may not be a huge accomplishment in and of itself, but I imagine he’d be just as high-ranking in much larger countries.

His latest release, Holocene is quite a lot like the other one-man projects you’ll hear these days, like Lowercase Noises or Cloudkicker. Don’t get me wrong and assume this is criticism. This is high praise indeed, those two projects are among my favorites of all time. Carefully planned, thoughtfully constructed, and expertly executed. There are certain advantages to collaborating with one’s self, and Kapiller takes full advantage of them. Everything flows together and syncopates beautifully.

The album begins with what sounds like an old folk tune, carrying an ancient story along with it. The layering, buildup, and release of the mixture of acoustic and electric elements makes for a goosebump-inducing experience. It doesn’t really feel like standard post-rock, primarily because of the swelling acoustic aspects that present themselves so often in a way that is refreshing to hear in this genre. It’s the first time I’ve heard folk influences in post-rock that didn’t annoy the hell out of me.

Every single track is its own work of art, all for different reasons. Some are soft, some are metallic, and all are beautiful. ‘Death In Norilsk’ sounds like the soundtrack to a viking’s funeral, scored by Russian Circles. ‘Turned Into A Deer’ sounds like it came off the b-sides from Phil Keaggy’s “Beyond Nature”, one of my favorite solo guitar albums.

I especially love the lyrics from ‘Feathers And Bones’, speaking of unbearable sadness and lonliness and death’s place in nature’s life cycle. (At least that’s how I’ve interpreted it) However, I can’t help but find the screaming to be very out of place. This whole album is just one gorgeous track after another, and I can’t really see how this flows with the rest of the album. The music is awesome, just like anything else presented to the listener in the last 6 tracks. In fact, the last two tracks have very odd feelings to them, ‘90 Days of Night’ has this very strong synth presence, which is kind of against the whole natural atmosphere that’s been presented to us for the last forty minutes or so. It’s just a really odd way to end an album, since everything sounds so wonderfully thematic. It’s a small complaint in the grand scheme of things, but it plays a big part in how the album leaves you feeling askew, like ending a journey with a misstep.

I think what I love the most about this album is how it highlights several different post-rock projects, several of which are also one-man projects. ‘Tesla And Tunguska’ is a reworked track from Erudite Stoner, which would easily explain the vast amounts of acoustic guitar. ‘Death in Norilsk’ is from Endless Melancholy/Sleeping Bear (both are excellent bands to get into) ‘Feathers And Bones’ features nullingroots on vocals and last but not least, ‘90 Days of Night’ features István Csarnogurszky of musicformessier and Black Hill on guitars. Again, you should check out all of these bands that have helped to creates such a gorgeous album.

And this gorgeous album is available now on Release The Long Ships’ bandcamp page, generously offered at name-your-own-price, and also includes links to the aforementioned contributors in the album’s description.