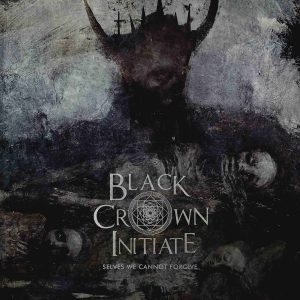 Things can be positively or negatively influenced in many ways. As we grow up, we are influenced by our parents, our friends, and our surroundings. Music can be a big influence as well. It can influence our mood, our style, and many other choices we make. Music can influence people to play, what to play, or how they play music. As a child my early inspiration, or influence, to play the drums was Buddy Rich, who I saw battle Animal from the Muppet Show, and ‘Frankenstein’ by the Edgar Winter Band. I was never able to play as well as Buddy, but that never stopped me from enjoying the drums. Every musician is influenced by something, but it is what they do with those influences is what makes them unique. A band like Black Crown Initiate obviously has many influences, and they show many of them off on their sophomore full length album Selves We Cannot Forgive, released via SPV, July 22, 2016.

I have been a fan of Black Crown Initiate since their Song of the Crippled Bull EP, so this album was one I was definitely looking forward to. Opening track ‘For Red Cloud’ puts me right where I want to be, in full windmill head bang mode, with James Dorton growling away. Andy Thomas’ clean vocal also makes its presence known, setting off the “chorus” in fine fashion.

As evident from the second track, ‘Sorrowpsalm,’ Selves We Cannot Forgive does not maintain the same pace as The Wreckage of Stars. I like this and feel it adds an extra dimension to the music, not just hammering the listener song after song. This is where some of those influences I spoke about earlier come into play.

I know Opeth is a name that gets tossed around a lot when it comes to Black Crown Initiate, maybe because of the intricacies of the proggy tech-death both (used to) produce. One influence I think that should be mentioned is Rush. The track ‘Again’ is a perfect example. For me, Rik Stelzpflug’s guitar is very Lifesonish here, especially in the solo, actually on most solos on the album, as he flows smooth chords over Nick Shaw’s noodling bass line. The song ‘Belie the Machine’ may start out Opethian, but if I did not know who I was listening to, I might mistake this for a new track from another heavily influenced band, Rivers of Nihil, at least until Thomas’ vocals kick in.

On the other hand, songs like the title track and ‘Matriarch’ do remind me of something from Opeth. With delicate guitar intros and piano overlays, they shift from clean to growling vocal, and even have fairly Åkerfeldty solos. The album ends on the very somber tune ‘Vicious Lives.’ Definitely more TesseracT than Tool, it is a fitting closer to an already dark record.

Recorded and mixed by Carson Slovak and Grant McFarland at Atrium Audio Recording Studios in Lancaster, PA, Selves We Cannot Forgive is a step in the prog direction more than in the tech-death direction for Black Crown Initiate. For some, this may be more of a step sideways, or even backwards. However, for me I see it as a big step forward. To be able to slow down and diversify their already brutal attack only adds depth and feeling to their sound, allowing this album to possibly be a jumping off point for even greater things to come.