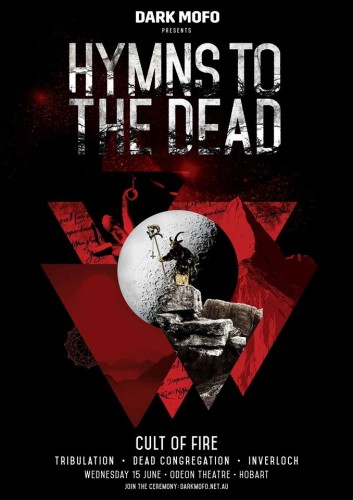 I am not a metal fan. It’s not that I have anything against the genre, it’s just never really struck me as my thing. I think it’s the vocals. Normally, post-rock is my thing. The intracacies that the music has to involve to make up for the lack of vocals is fascinating. Long, sweeping chords are my jam, and I’ve often found that most areas of metal leave me wanting. So you might be wondering what I’m doing reviewing the Hymns To The Dead show at Dark MOFO. The show featured four bands, culminating in a performance by the legendary and mysterious Cult Of Fire.

Truth of the matter is, even I was a little unsure about what I was doing there as the sight of red lights diluting through the artificial fog that blanketed the stage greeted me. The product of the smoke machines that lay behind a stack of amps rolled off stage in waves. It appeared to be a miniature version of Ragnarök. Fitting, I thought, seeing as the beards were more viking than hipster. I’m not a big guy by any stretch of the imagination, but my fellow concert-goers made me feel skinnier than usual. I was a needle in a stack of lead pipes. The uniform seemed to be black jeans (torn or not, it didn’t really matter), black band tees, and enough leather to put a souk to shame. It looked like what a non-metal fan would expect a metal crowd to be.

But it wasn’t all a raging cliché. I saw the occasional dash of colour, and the general mood was happier than the outfits may suggest at first glance. I grabbed a cider and headed to the front.

Inverloch were up first, and opened the show with a charged start. Their stage set up was cool, if understated. They had the occasional trident symbol, but that was pretty much it. I was impressed by their band control. It was tight, and the instrumentation was stunning stuff. It was clear that they knew each other very well, and knew the way they played. Inverloch were the only band that I had previously listened to, and they were great live. Energy picked up around 4 or 5 songs in, and it was largely sustained throughout the rest of their performance. Structurally, their set worked well. You could really feel the mix of leaden, slower music and faster stuff coming together to create this wonderful dynamic. Great effort from the Melbourne based band, and it was a solid start to the evening.

Next up was Dead Congregation, hailing from Greece. I only knew they were beginning to play due to the pure feedback that they opened with. It certainly got everyone’s attention. What followed was something that was significantly more… thrashy than Inverloch. They were less introspective and more sporadic, which didn’t really appeal. I was pretty done with these guys a few songs in, but then they did something a bit different. You know the latest Godspeed You! Black Emperor album? How it has this 18 minute section of pure drone in the middle? Well they did something a bit like that, except shorter. It wasn’t quite as intense as when GY!BE did it, but it went on long enough to annoy some of the more impatient fans (which I have to admit gave me a little satisfaction). They played another conventional metal song, before rounding their set off with about three minutes of what seemed to be tribal singing and church bells. It was different, which was good, but it didn’t work as well as I’d have liked. Ho hum.

It was at this point when I started feeling some more pressure on my back as the venue filled up more. By the time Tribulation walked (read: strode) on stage, I was sandwiched against the stage. So when they started playing, a sense of dread for my spine washed over me. But, Tribulation was worth a potential spinal injury, because they fucking destroyed. I actually wrote in my notes in all caps that “HOLY FUCK THEY HAVE STAGE PRESENCE.” Their guitarists were nigh on gymnastic in the way they glided and danced around the stage. All while wearing heels the size of my hand. It was impressive. Not only was the show they put on awesome to watch, but they managed to do it all while playing some really great music. The instrumentation was top notch, and they certainly did not sacrifice musical nuance in favour of a visual spectacle. Not much more to say here, just that if you ever get to see these guys live, do. 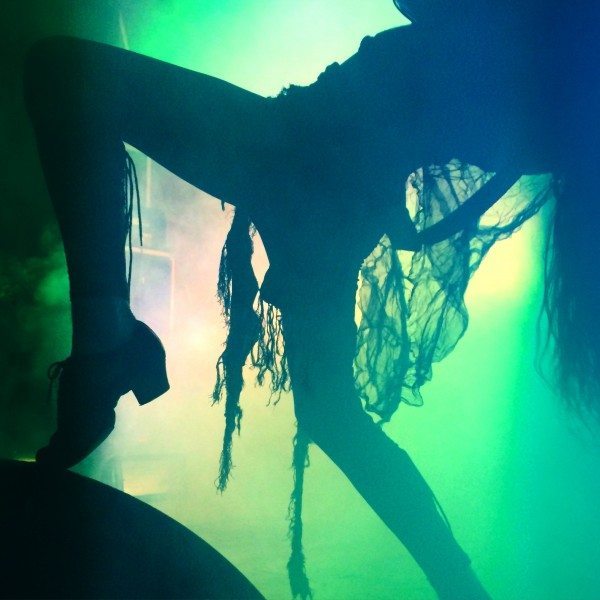 At last, the final act. The headliners of the evening, Cult Of Fire. Somewhat legends in their field, the band has built a mystique out of a small amount of appearances. The first thing about them was something that actually caught my eye before they came on stage: the COOLEST MIC STAND EVER. Seriously, it had two scythes crossed, and it loomed over the crowd like an omen. Their whole stage set-up was pretty stunning, honestly, with a mix of incense (so. much. incense.) and Hindu idols. So when they emerged draped in massive robes adorned with various symbols, we were ready. And they did not disappoint. Musically, they murdered. It had everything, from nuanced and introspective instrumentation to powerful and emotive vocals. The only real downside to the show was that they finished about 20 minutes before they were due to, which was disappointing. Still, what they did play was crazily good. 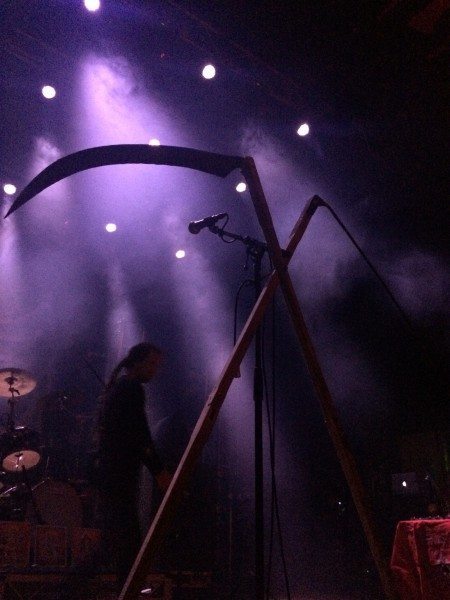 And thus the night came to an end. The venue doors opened, and a fountain of metal-heads poured onto the street, drawing some odd looks from passersby. And as I mourned my eardrums, it dawned that I had actually enjoyed the gig more than I had expected. There were points when the crowd as a collective was frustratingly intrusive (why can’t people just listen to the music and *not* punch each other in the face?), but as a whole, the night was pretty brilliant. I guess if this was a think-piece this would be the point when I would spout the importance of giving all subcultures a go and not judging a book by its cover, but the real moral of the story is that cheap concert tickets are always worth it.