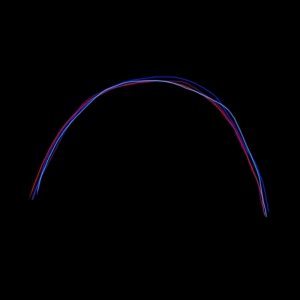 There are days / nights / journeys-home-from-work-on-buses that seem to require a certain soundtrack. For me, moody melancholia is a state that I sit quite comfortably in. It’s my escapism, my reflection, my headspace. Since discovering Peacock Affect, I haven’t had to look far for my go-to tracks.

Based in Devon, George Holman started writing his own music under the moniker Peacock Affect after deciding his other band didn’t play enough sad, emotional songs. He composed ‘Wallflower’ (which has since had over 94,600 listens on SoundCloud) and the project grew from there. Now with frequent plays from Gideon Coe on BBC 6 Music and a feature on Huw Stevens’ Radio 1 show, Holman has a released a substantial collection of songs online, where he has amassed an impressive following.

The Rainbow EP, Peacock Affect’s latest release, is a beautifully crafted set of sad, dreamy songs. Inspired by the likes of Morrissey and Elliot Smith, the record is built upon a foundation of softly-strummed guitars and simple arrangements, with Holman’s subdued voice gently coaxing the listener in.

His lyrics are not for the faint-hearted, but hidden amongst the stylised lamentation are carefully constructed, witty phrases, dusted with dark humour. “I was happy at first and then I got stuck in a hole / In the hopes that a spaceship would take me far far away / From all the idiots and trees and pet lovers that eat meat”.

The short opening track, ‘Untitled #1’, immediately sets the tone and is quickly followed by new single, ‘Spaceship’. The song is propelled by a driving rhythm and Holman’s shrewd lyrics. It gradually opens up into a chasm of distorted guitars only to swiftly return to a slightly jilted oscillation between two chords. The accompanying music video is a wondrous vision of landscapes and storytelling, exploring themes of childhood and acceptance.

The sombre tone of the EP is balanced with soaring melodies that seem to offer hope, or at least an escape route. In ‘A War In Venice’, these come in the form of delicate, rising guitar riffs – interspersed with higher countermelodies – and a rawness that seems to be missing within so much music nowadays. The song carries itself and takes on the role of a lullaby; soothing the soul.

Much of Peacock Affect’s music is introspective, commenting on human vulnerability. ‘Sleep’, a song Holman describes as running along the themes of unconsciousness and the mental preparations of meeting death, explores our truest fears and apprehensions. It’s so brutally honest that it almost hurts. It is however, bearable, as it’s set against a beautiful musical canvas that weaves all of our doubts and suppressed emotions into an understated, masterful piece of art. It allows the introvert to breathe a sigh of relief, safe in the knowledge that although we may all be lonely, we are not alone.