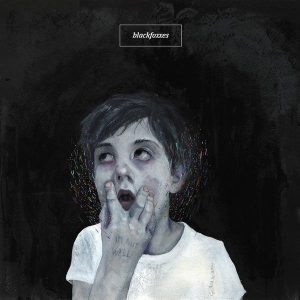 Just recently I was sat watching a satellite TV music channel one quiet afternoon with a friend of mine. Now, I don’t do this very often, and I realised why. The amount of over-produced, anodyne, cookie cutter, ‘alternative’ music was astounding. All the videos seem to run into one another with their similarity. After much colourful criticism we switched to YouTube instead, one of the bands we searched for was Black Foxxes, having recently seen them live at 2000 Trees festival. Black Foxxes are the antithesis of what we saw that afternoon, searing vocals, delicate and cracking with emotion one minute and screaming the next. Dynamic and layered guitar parts and a strong rhythm section.

I’d come across Exeter three-piece Black Foxxes from their first EP Pines. Tracks like the brooding ‘Home’ and screeching ‘You Gotta Grow’ making an immediate impact. The first thing that struck me about their first full length record I’m Not Well is the production quality. Adrian Bushby (Placebo, Muse, Foo Fighters amongst others) has really hit it bang on.

The album opens with the title track, Mark Holley’s vocals starting with tinges of an early-U2 Bono over a quiet solo guitar. Soon building to a driving, rocky crescendo before dropping back to a quiet ending. ‘Husk’, is a more straight up rock track. ‘Whatever Let’s You Cope’ is in a similar vein to ‘I’m Not Well’. Reminding me of Brian Molko at times, the backing vocals and main vocal effects add some colour to what could be a more straightforward track. Again, just as the tracks builds it dies away again. ‘How We Rust’, has a slightly different feel. Brooding as before, guitars always on the edge of breakup and feedback. The main vocal tracks having a more musical feel rather than the edgy feel of previous tracks.

‘River’, is a stunning track. Holley’s vocals scratchy and full of emotion, lyrics conveying some real emotion. The tracks descends into a wall of noise and feedback. Held together by the simple but heavy and effective drum track. ‘Maple Summer’, ‘Bronte’ and ‘Waking Up’ are more straightforward rock songs. Nothing wrong with this but what makes the band for me are when the guitar and vocals are on the edge of cacophony.

‘Home’, is a great example of this. Re-recorded for this album, to a fantastic effect. The addition of guitar parts and the vocal effect show a band growing in talent and mastering their craft. ‘Slow Jams Forever’ uses more power chord than the signature trebly, open chords used on the majority of this album. This gives the song a heavier feel. ‘Pines’, the last track on the album is another massive, anthemic track. Chaotic and driving whilst still remaining musical and melodic. When the lead guitar departs to a stunning solo the bass and drums hold this track together. If you listen to nothing else listen to the last two or three minutes of this track. It’s just awesome.

Black Foxxes have created a fantastic first LP. Hard to categorise into any specific genre, there will be comparisons to Brand New, Manchester Orchestra and the like, but the band have enough of their own sound. Holley’s vocals especially are very distinctive and for a three-piece create a surprisingly large sound. Black Foxxes are a refreshing alternative to the anodyne, ‘alternative’ music all too common at the moment.