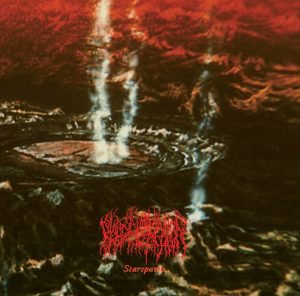 A lot of the best death metal records of the past few years have been some of the weirdest. Death metal after all has always been about pushing the limits of extremity since its inception, and in an era when the threshold of sheer brutality is seemingly as far as it can go for many acts, the best way to do that is by being unearthly, unsettling and unconventional. These bands have provided a welcome antidote to the overly sanitised and clinical tech death that has swamped the extreme metal landscape for much of the last decade. Chthe’ilist, Grave Miasma and Horrendous have all made an impact within the last twelve months, and Blood Incantation then with their debut full-length Starspawn seem to be among good company.

Signed to Dark Descent Records who have pushed much of this awesome music into the light of day, Blood Incantation sent out some ripples sensed by those with their ears glued to the underground with their highly technical but sickening and ugly Interdimensional Extinction EP last year with which they made clear that they were a proposition with tonnes of potential to keep an eye on if not the fully finished article just yet. It’s satisfying then that a leap has definitely been made from that release to Starspawn, which is obvious from the get-go as ‘Vitrification of Blood (Part 1)’ gets the ball rolling with an opening riff of seismic proportions crumbling its surroundings before being joined by an eerie lead that puts Blood Incantation’s focus on the odd and the cosmic front and centre and vocals that sound like David Vincent trapped in a black hole.

Starspawn’s song-writing and composition is what sets it apart not just from its predecessor but its contemporaries. Interestingly, the production feels ever so slightly dirtier than Interdimensional Extinction, feeling like a horror unearthed from a subterranean cavern on an alien world as opposed to something emerging from the black void of deep space. Unlike some truly dingy death metal records though this at no point muddies the playing or the subtleties of the tracks on offer, and there are many. The aforementioned opening track runs for thirteen minutes, a ballsy move on Blood Incantation’s part putting the most expansive song right at the beginning, but its many twists and turns are completely engaging running the gamut of off-kilter death metal passages before eventually opening up into an almost funeral doom crawl in its final third.

It’s the guitar playing both six-string and four-string that is truly stellar throughout, the rhythm, lead and bass parts finding perfect space to weave around each other, but always working in perfect tandem to hammer home whatever idea Blood Incantation are firing out. A cleaner instrumental track like ‘Meticulous Soul Devourment’ or the incredible latter half of ‘Vitrification of Blood (Part 2)’ do not sap any momentum due to the focus on atmosphere over brute force, and even the most conventionally catchy riff on the album which anchors the title track feels like it’s from another galaxy.

Throughout this album Blood Incantation simply seem unafraid. At no point does Starspawn cross over into the sheer avant-garde cacophony delivered by a band like Portal, but there is a constant sense of something malevolent being embedded in the core of this music which is more than happy to playfully skew perception. They don’t set out to flashily break as many rules as possible, but those aren’t going to stop Blood Incantation doing something they feel will work. There are clear influences in the likes of Gorguts, Morbid Angel and Human-era Death, but Blood Incantation have a freakish touch all of their own, and in Starspawn they’ve made a record which can go toe-to-toe with the leaders.