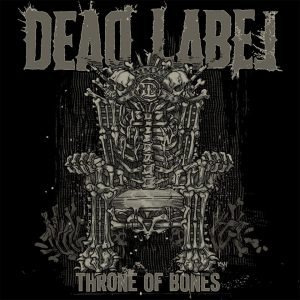 A few weeks ago, school was out for Summer. Not only did hoards of school children get unleashed upon the earth, but Dead Label‘s sophomore album Throne of Bones was released. The reports are out and the Irish three piece finished top of the class. Within the first seconds of album opener ‘Throne of Bones’ it is clear the guys have done their homework. Melding modern metal influences solidly with classic nineties metal stalwarts, Dead Label have forged a gutsy sound of their own. It is easy to see why they’re the support band of choice for headliners like Fear Factory and Machine Head. Dead Label would have sat formidably shoulder to shoulder with all of Roadrunners’ finest in its hey day. They’ve managed to study the best pieces of metal and left all the shitty cliches behind.

Innovation and ground breaking were not the priority here, simply headbanging and ear breaking. All within the confines of a three piece band. It’s rare metal bands can sound so polished and defined with this setup. Along with the likes of Helmet, Cog and the Melvins, Dead Label have smashed out a massive wall of sound. Danny Hall’s guitar tone is impeccable. Solid, chugging heaviness that all down tuned shredders try to conquer. Yet it is bursting with that industrial, mechanised clarity all Meshuggian acolytes aspire to. Dan O’Grady’s bass is exactly where it needs to be in a three piece of this ilk. Subsonic devastation during riffing and cementing the tunes when the guitar, rarely, does something other than melt your face. Couple this with Claire Percival’s impeccable groove and blisteringly industrial attack on the kit, the Irish three piece have created an enviable metal sound. True to all it’s influences, yet defiantly in a league of its own.

The only criticism I could really have of the entire album is O’Gradys’ vocals. Don’t get me wrong, they are absolutely awesome for their tunes and they are a damn sight better than most screamy, inaudible bullshit that’s released these days. Yet I can’t help but feel that if the vocals harnessed the clean and growl dynamics of most of Dead Labels influences a bit more throughout their tunes they really would smash this shit right out of the park. Although considering the guttural punch and precision O’Grady’s achieving whilst playing bass at the same time, this really is only a minor, personal criticism. One I think will undoubtedly improve throughout their career.

So in closing, if you’re in need of some modern metal that is violently fresh yet will strongly sit in between your usual monsters of rock, do yourself a favour and chuck Throne of Bones on high, high rotation.