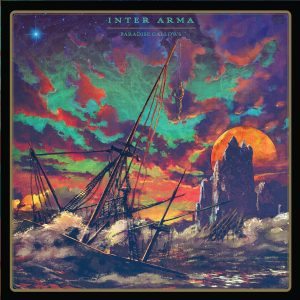 Released on July 8, 2016 via Relapse Records

Paradise Gallows is a new release from Inter Arma, of Relapse Records, who come from Richmond, Virginia. Paradise Gallows was released on April 6, 2016. I am newly familiar with these guys, as a friend recently suggested I give them a try, so this review is based on my first real sit-down with their material.

This is a beefy album, but since each song has its own flavor, you’re not missing out on continuity by dropping in wherever you want. Also, each listen will reveal something missed on the previous spin. There’s a lot to digest and share, so apologies in advance for the length of this review.

Paradise Gallows begins with ‘Nomini’, a pleasant instrumental with singing duet guitar solos. I really love the tonal texture of the bass and guitars; thick, gravely, and strong. It also introduces an operatic vocal in the background, drenched in reverb. It adds a choral feeling, oddly reminding me of the Cosmos. We’re floating in space, folks! It’s so relaxing!

‘An Archer in the Emptiness’ begins abruptly, jarring the listener with down strokes and toms-toms, then after the intro of the song we are pummeled by blast beats and a guttural vocal delivery.  It’s a crushing juxtapose to ‘Nomini’. The guitar tone is straight nasty, which I consider to be one of strong forces in this release. It’s almost a Swedish HM-2 sound, but slightly less nasal. The lyrics speak of a man’s journey from the innocence of birth and youth to an ageing melancholy, approaching nihilism. There are a few tempo changes, but this track is crushing and a perfect follow up to ‘Nomini’.

‘Transfiguration’ is another powerful track, beginning similarly to ‘An Archer in the Emptiness’, but with a faster tempo. Again, I am impressed with the guitar tone and gravely distortion. I’m liking the mix of the instruments. Everything sounds huge, dirty and crispy, and loose enough to give it a raw, elemental feel. I’ve noticed a change in the vocal delivery and am hearing more of a black metal influence. After the first verse, we get more blast beats in a slight departure. It’s a chaotic brew, reminiscent of a tornado full of nails and 2x4s. The vocals are screechy, high pitched; very black metal. But the riff beneath has a wonderful dissonant melody that makes me feel tense. It’s absolutely wonderful. ‘Transfiguration’ also has some tribal-esque rhythms with what sounds like synth in the background. It winds down to what feels like an end, but rewinds to the introductory verse pattern to close out. It’s a fantastic song that contains elements of sludge, black, doom, and death. I keep thinking about a tornado. When considering the lyrics, speaking of the stagnation of human society, I think the song is almost perfect.

‘Primordial Wound’ and ‘The Summer Drones’ are slight departures from the first two songs, in regard to style and execution. ‘Primordial Wound’ takes a slower, doom/drone direction. This is my least favorite song on the track. I don’t like the vocal delivery that much and, to me, drone songs are very hit or miss. What saves this song, though, are the lyrics. Very well written, complimentary to the song, and utterly bleak. I really appreciate how nicely the lyrics fit with the songs to create a more complex experience. ‘The Summer Drones’ feels like typical stoner metal. Its intensity rests between the glacial movement of ‘Primordial Wound’ and the more chaotic feel of the opening songs. I think the song is performed and mixed well. It sounds great and the lyrics, again, are a perfect companion. However, the song is lost on me as this style of music is over-worked to me. It’s like having Italian food 4 days out of the week and just wanting to avoid Italian restaurants for a little while. I can appreciate it. I like it, but I’m not feeling it.

‘Potomac’ was a big surprise. Definitely the prettiest song on the album and a fitting halfway point. Taking into consideration the flow of the album, I think the last two songs made for good segues to this. It’s a slow instrumental song that begins with a beefy guitar duet, backs away into silence and makes room for a lone piano to begin the new melody. It is soon accompanied by an organ, acoustic guitar, and new instruments every few measures as it builds to a crescendo. The guitar duet that begins at around 4 minutes is amazing. Beefy guitar tone and wonderful melodies can’t be beat. Something I really appreciate about their solos is that they aren’t overly technical. They have a very organic feel that, while standing out in front, don’t clash with the songs.

The end of ‘Potomac’ blends right into the title track, which has an almost psychedelic intro. Again, I’m caught off-guard with the songwriting and delivery. I’m beginning to get really pissed that I haven’t been familiar with this band already. The song is a monolith of texture, where you can almost grab the tones. When you hear the line “Time, have you forgotten my sullied name?”, the song blasts open with the speed of a pall bearer. It still has a slight psychedelic feel, but there is a lot of power in the riffs and vocal delivery. This is a haunting, tortured soliloquy. ‘The Paradise Gallows’ has a lot of muscle, a lot of beef, and a lot of finesse. This is probably my favorite track.

‘Violent Constellations’ is another chaotic track, reminiscent of the first two. What I noticed in one of my many listenings was the muffled raking of the strings when some chords were played. It sounds nasty and not too many bands I’ve listened to do it. Despite being like the first two tracks, this is another individual offering. It has slightly more sludge than black metal influence and more cavernous feel to it. There are some neat little departures that feature some interesting guitar work. Lots of pull offs and dissonant guitar duets. Really interesting solo work and backwards melodies. This track featured more of the little things that stick out after multiple listenings. Each time I heard something I didn’t the time before. This being said, I was slightly disappointed with this track after ‘The Paradise Gallows’. The lyrics shine again; I love the line “We violent ones, we last longer”.

‘Where the Earth Meets the Sky’ is a good finish. It brings the listener down after the quick finish of ‘Violent Constellations’. Some great vocal and acoustic guitar work. It reminds me of Scott Kelly or Steve von Till. It’s a really nice bookend to the album, providing a cycle for the listener. It made me feel as if I were sitting on a rock, enjoying the view of a wide canyon.

Wow. Inter Arma blew my doors off with this release. Even though I wasn’t geeked about every song, these gents worked their asses off putting it together. The attention to detail was great and it feels like they make this music for themselves, as much as anyone else. I can appreciate it, if that’s the case.

Paradise Gallows is a monolithic record, containing a robust array of influences and arrangements that you simply can’t glean from the cover art – which is amazing! Like David Bowman’s descent into the stargate, it’s not until you are committed that you start to appreciate how vast Paradise Gallows is.

I am very impressed with the range Inter Arma demonstrate with each of their songs – while at the same time creating a cohesive theme both musically and lyrically. They’ve written, arranged, and mixed a crushing album that conjures a myriad of images and emotions – while pushing the boundaries of conformity. It is dark. It is bleak. It is beautiful. This is exactly what I expect from a metal album.