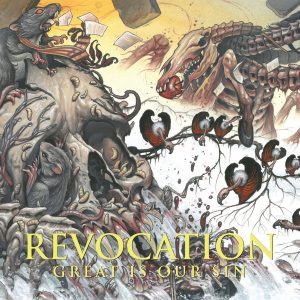 The phrase goes “Familiarity breeds contempt.” This means that if you know someone very well or experience something a lot, you stop respecting him, her, or it. This happens frequently with many things, even music and musicians. Take AC/DC for instance, who have been recycling the same songs for years. Seemingly, their philosophy in song writing is if it ain’t broke, don’t fix it. This could be said about many bands, including tech death/thrash juggernaut Revocation. Founding guitarist and vocalist David Davidson has been churning his and the band’s version of metal since 2000. Great Is Our Sin is their latest instalment, released July 22, 2016 on Metal Blade Records.

I have written about my feelings of familiarity with Revocation before. I am not sure what it is, but guitarist and vocalist David Davidson’s ability to make his riffs sound like something you have heard before, without ripping someone else off, is uncanny! It has to be something about the way he weaves thrash, death, classic rock, and even jazz within his playing that makes it all sound so easy to get into. Of course, there is no shortage of this on Great Is Our Sin. Davidson again puts on a clinic of the way modern death/thrash should be done. Chris Zuess Harris again does a masterful job helping maintain the patented Revocation sound. Marty Friedman’s guest solo on instrumental ‘The Exaltation’ is also an added bonus.

Respectively, there are some noted differences on this album compared to others. First, there is new drummer, Ash Pearson, formerly of 3 Inches of Blood. Ash makes his presence know quite frequently throughout the album, bringing a more diverse playing style than some of his predecessors to the patented Revocation sound. This is especially noticeable during the dark, slower parts of the album, which on this record are a little more prevalent. Secondly, I would not call Great Is Our Sin a concept album, but there is a lyrical theme to it. Whether it be political corruption on ‘Only The Spineless Survive’, the public executions of Medieval times in ‘Theatre of Horror’, or the very real problems presented by climate change on epic closer ‘Cleaving The Ice Giants’, and the aptly titled ‘Monolithic Ignorance’, they all speak of the foolishness of man throughout the ages. Thirdly, is the more prevalent use of Davidson’s clean vocal. Now, do not get concerned that he has lit up this record with smooth vocal lines and a soaring falsetto, because that is definitely not the case. However, Dave already has one of the more understandable growls, so extending his yells to be more melodic is a nice progression. A great highlight for this is the aforementioned closer, ‘Cleaving The Ice Giants’, my favorite track on the album.

Has my familiarity with Revocation bred my contempt for Great Is Our Sin? No, it has not. Now, is it immediately discernable from the rest of the catalog if you played it on shuffle? Not necessarily, but you get the point. I am sure hardcore fans will certainly be able to tell the difference. Great Is Our Sin is a welcome addition to the Revocation legacy, and I look forward to any progressions they may make, as minor as they may be, in the future.