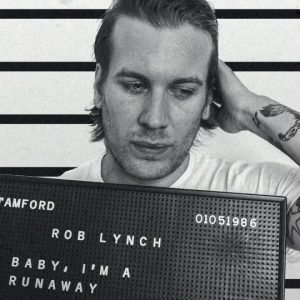 The world has always been a scary and confusing place, but it’s fair to say it’s been a particularly rough month or so. However! There’s always music, right? And there’s always Xtra Mile Recordings, one of the finest labels around. They’ve recovered from their own tragedies, not least the loss of almost all their stock in a warehouse fire during the London riots five years ago. And one of their brightest hopes right now is a certain Mr Rob Lynch.

Opener ‘Prove It!’ immediately provides an accidental reminder of those events of 2011, talking of things “going up in smoke”. But this extended metaphor of destruction is just one of many, and it’s testament to the musical craftsmanship surrounding them that they don’t sound whiny and self-indulgent. On the contrary. These stories are good-natured and invite you in, like a McEwan novel that actually has a reliable narrator.

‘Tectonic Plates’ is the standout track, and not just because it’s the first of two ballads after a relentless storm of twang and beat. It represents Lynch at his most tender and honest and relatable. The ghosts he tells of in the “places we would go” in combination with the song title remind me of the cliffs along the Jurassic Coast in Devon. It’s possible to tell from the differing rocks in the cliff face that there used to be a river running through them, and that they used to be somewhere in present-day North Africa. Geology’s sexy. But the feeling that you’re slowly and unavoidably drifting apart from somebody or somewhere is just part of everyone’s life, seemingly perpetually from your teens onwards.

Whenever I hear the buoyant yet gentle tones of Rob Lynch, I wonder why he’s never appeared on the soundtrack of a hit Hollywood teen flick. Actually, he might have done, because I don’t think I’ve seen one since Adventureland in 2009. (The Fault In Our Stars doesn’t count, right?) But there’s definitely something there that’s just massively accessible and positive and addictive and easily reminiscent of important things, even if you don’t realise they’re important at the time. Hell, the opening riff to ‘Sure Thing’ is better than that to ‘Semi-Charmed Life’.

Baby, I’m A Runaway proves that Rob Lynch is capable of having more than just a good time. It’s anthemic. And fuck knows we need something uplifting right now.