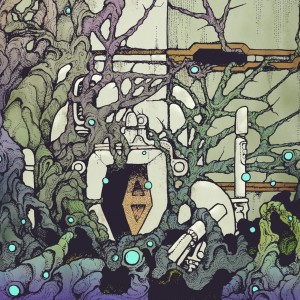 In the spirit of full transparency Slomatics have created a heavy album that is so admirably edited and executed in concept, it’s probably my favorite release this year. Whirling synthesizers usher in ‘Estronomicon’, an instrumental manifestation of an album that is fully dedicated to the build. Its steady climb through an odyssey of sound so ominous and overtaking is worth joining for the full 7 tracks. The first song and subsequent moments play like a meditative 80s fantasy movie score. From start to finish the album feels ambitious, yet a patient continuance of their 2014 effort Estron. Future Echo Returns stays rooted in solid drumwork and riffs that ebb and flow in harmony.

The vocals are an even mix of spitting jabs giving weight to every word and soaring far away sounding commands. Some of the best vocals slide through the super sludgy track ‘In the Grip of Fausto’. Abrupt breaks in melody punctate throughout songs like ‘Electric Breath’, supported on a platform of synth. An element of the album that adds to this is the deliberate cut offs severing one part of the journey in favor of a new one.

Things get softer bringing in ambient tones on ‘Ritual Beginnings’ acting as an intermission with stylings that are reminiscent of bands like Agalloch. The atmospheric sounds are used appropriately, never overdoing it and sparing the album from becoming campy. Hands down the most gripping track for me was ‘Supernothing’. The track chugs along until about 2 minutes in when vocal harmonies rise and float adding some beauty and a dark, church like effect. Using just the right amount of creepy choral synth on ‘Into the Eternal’, Slomatics present a song that culminates a refusal to lock solely into one sound but pull from several points of inspiration. Drawn out chants and chord progressions are superbly hypnotic as the song opts to slowly fade out to a soft finish as its farewell.