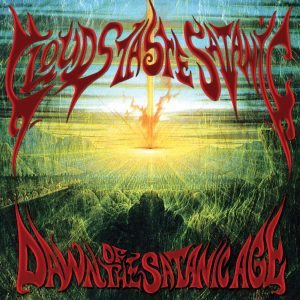 Released on September 27, 2016 via Independent

Clouds Taste Satanic has been a pretty big hit with the underground doom metal scene from the very beginning, with their slow-moving, brooding debut To Sleep Beyond The Earth.

When it came to their second album Your Doom Has Come, I’m pretty sure Echoes and Dust was the only one who didn’t slather it with praise. It had its problems, and so naturally I was a bit hesitant to pick this band up again for reviewing.

Thankfully, I was terribly wrong. Unfortunately it doesn’t have a lot of the qualities I enjoyed so much from their first album, but they’ve still improved upon their last album, which I found disappointing. But they’re still loud as hell, soul-crushingly heavy, and thoroughly enjoyable.

At first glance, it’s actually pretty similar to Your Doom Has Come. It has shorter songs, and the album as a whole looks a bit too over the top in terms of styling. Their schtick of being ‘Satanic’ is almost too much, I actually giggled when I saw the melodramatic album title. It makes for a good theme throughout the albums, however. Very clear imagery on every track.

The music itself is much more enjoyable than the cover, with riffs galore, prolonged jam sessions, and intense grooves. The guitars are thick and chunky, with the lead guitar whining and wailing above it all, it’s positively brutal. The bass doesn’t really do too much to make itself known, but the volume of it makes the riffs really pop. The drums feel a bit drowned out in the mix at times, but it serves its purpose, and makes the guitars seem that much louder.

My biggest problem about this album is how they introduce new riffs in some of the pieces. They’ll cut out everything but the lead guitar in a sudden fashion, they’ll play the riff a couple of times, bring in the second guitar to play a fill between riffs, bring in the drums, and then they all play together for maximum riffage. It’s a very mechanical approach, and it happens several times throughout the album, using silence to polarize their volume and sound even bigger. I get why they do it, but they do it too many times for it to be cool.

Overall it’s a great album, and I really do enjoy it a lot. I would be lying if I said I didn’t miss the post-rock influences in their sound, but this new direction seems to be working for them, and a lot of people seem to enjoy it. Don’t fix it if it ain’t broke.