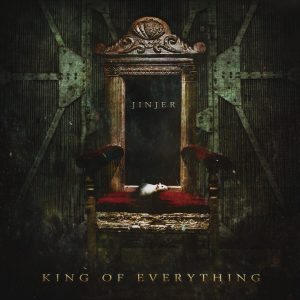 One thing I have learnt from listening albums for review is that heavy/extreme/metal bands are found in all corners of the globe. One positive aspect of globalisation must be that music or all types and genres can be heard anywhere at anytime. The wonderful thing is the ability of music to convey a certain emotion regardless of where someone might be or their race.

Jinjer, according to their own biography, draw their influences from the industrial landscapes of Eastern Ukraine. Their sophomore effort, King of Everything gives the impression of a tough existence, with anger, frustration and sometimes joy coming across. Considering the stories of band members leaving suddenly, visa problems, right-wing extremists and the pressures of being a touring rock band it’s not surprise that there are some deep emotions.

King of Everything opens with the excellent Tatiana Shmailyuk (vocals) with a light/acoustic backing and clean vocals. Not the start I was expecting from a band described as metalcore! ‘Captain Clock’ is much more what I was expecting, fast, brutal and complex. The mix of vocal style, which ranges from guttural roars to surprisingly soulful. It is interesting and has and gives a balance to the hectic and heavy tracks and prevents what could be a very one dimensional album.

‘Words of Wisdom’ and ‘Just Another’ continue in a similar manner, brutal guitar riffs, groovy slap bass and hectic drums. Several of the tracks do seem to follow a pattern, screaming vocals with heavy guitars and bass followed a few minutes later by clean vocals. The tracks are brutal and unforgiving, further listens do reveal hidden complexity and nuance but at initially the first half of the album can seem very similar.

‘Sit Stay Roll Over’ is a jarring, urgent track. The band really gels on this track. The bass and drums lock in a complex rhythm and the guitar cut through the low end. ‘Under the Dome’ has a similar feel, the ending of the track just a cacophony of noise.

The tracks where Shmailyuk’s clean vocals dominate are the best for me. Her vocal range is stunning, she can, as mentioned, go from a roar to soaring and soulful, but also the control and the ability to take her voice to the edge of breakup is incredible, ‘I Speak Astronomy’ is a good example. The song has a wonderful dynamic range, dense and atmospheric. ‘Dip a Sail’ and ‘Pisces’ are similar. Still brutal and heavy but the clean vocals give a counterpoint to the deep and chunky backing. ‘Beggar’s Dance’ is a complete departure from the rest of the album. Starting with a funky bass line, jazz infused guitar and Shmailyuk’s fantastic vocals. A bit odd considering the rest of the album, but fun.

Jinjer have something unusual, in a world of one-dimensional metalcore acts they have a vocalist with an incredible vocal range backed by some talented musicians and the ability to create some interesting and complex music. Not all this album exploits this which is a shame. Nevertheless a worthwhile listen for fans of metalcore wherever they are in the world.