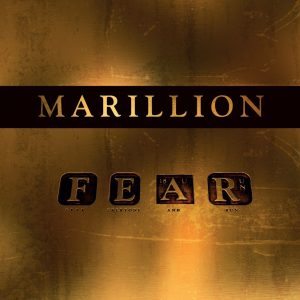 Remaining resolutely unfashionable and determinedly dogged in their refusal to change, Marillion have slowly become something of an institution to those in the know. Over the course of seventeen albums they have continually pushed forward with what progressive music means, and also changed the way in which a band can survive in the music industry with their much vaunted crowd-funding scheme, a scheme which they continue to this day. Now, they return with their eighteenth album, F E A R, and once again it seems that fire is still raging in the progressive belly.

F E A R (or Fuck Everyone And Run as the acronym stands for) is an album of big themes. Never ones to shy away from stories of emotional impact (‘King Of Sunset Town’, ‘Gaza’), this time they set their sights on modern life with capitalism, politics and the movement of people all being broached. For themes of such grandeur, it would be all too easy to slip up and turn into some po-faced nonsense but Marillion are the kind of band who thrive off this sort of challenge. Determined not to preach to the listener, they instead lay out the threads of the songs allowing us as listeners to hear and make our own minds up.

It’s this subtle way of opening up their music, and if anything is done subtly it is the pastoral Englishness of the opening of ‘Eldorado’, that leads the listener into their nest of emotional corners. Marillion have always had layers, here they have layers upon layers yet through front-man Steve Hogarth, they have a master ringleader who lays out the path for you to follow. It is then left to the masterful musicianship of Mark Kelly (keys), Pete Trewavas (bass), Ian Mosley (drums) and Steve Rothery who’s guitar forms that integral part of the Marillion sound to create the emotional maelstrom.

Not that you can single out any band member here as F E A R is a tour-de-force from a unit who are at the peak of their powers. As ‘Eldorado’ unfurls its wings, you never know quite which way they are going to take you next. Unashamedly progressive, it’s the human aspect which makes you wonder why this band aren’t playing to sold out stadiums. As it stands, their devoted fan-base continues to fund their albums and Marillion return the favour by never letting them down.

At five songs long, and three of those broach the 15 minute mark, it may be too much for the casual listener but for those willing to offer up their time they will get the aforementioned ‘Eldorado’, which explores notions of political entitlement with gold being the symbol of power, wealth and greed. It explores how political parties will rule by fear with key lines such as “we can’t keep letting them in” and “the haves and the haves not” providing a frightening vision of a country which is more unstable than ever. Deep themes yet you are left to make your own mind up as H gets increasingly angry and desperate toward the final denouement.

‘Living With FEAR’ is a brief respite after this and sets itself up in familiar anthemic territory of which Marillion do so well. Simple, yet powerfully delivered, you can almost feel the futility of it all as H turns the a famous man made object into a symbol of diminished power and energy. We may live in scary times but we have throughout history too and in the end it doesn’t really make a difference.

The true emotional heart of the album lies with the twenty minute centrepiece ‘The Leavers’, which focuses on the lives of transient people and how that affects the ones they leave behind. Rather timely with the EU Referendum, this song is actually nothing about that although comparisons will no doubt be raised. Instead you get a suite which allows the band to display the entire breadth of their experience yet its the simple piano moments of Mark Kelly which deliver the true moments of reflection. Musically this song drifts from shimmering synths, turning almost European, before answering itself (in the voice of the Remainers) as a delicate sadness. Where the Leavers of the song are gathering huge life changing experiences, matched by the pounding rhythm section of Trewavas and Mosley, the Remainers play with lost emotions set out on simple piano lines. In rather stunning style Rothery takes us out in what shall be left as a surprise for listeners in what may come to be known as Marillion’s masterpiece.

The capitalist rant of ‘The New Kings’ has already been heard by fans and in the context of the album it becomes all the more vitriolic with H taking great delight in getting into character, a trait which has become his hallmark. Crafty, sly, and then explosively angry, it’s a turn which shows Marillion to be a band so alive and full of vitality.

For a band who are eighteen albums down the line, one might almost forgive Marillion for resting on their laurels yet with F E A R they have released an album which is dense, emotional, cathartic and explosive. Rarely has a band sounded so on tune and what is all the more remarkable is that F E A R stands side by side with anything they have ever done before. Indeed, you can file this album alongside Marbles and Brave for its sheer scope and emotional impact and in time may become regarded as their best yet. For a band best known for a hit song back in 1985 maybe it is time for everyone to get reacquainted with them. Marillion remain our best kept secret and with F E A R they remain truly at the top of the prog game.