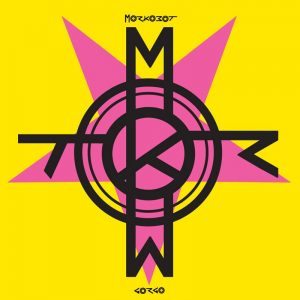 Released on September 14, 2016 via Supernatural Cat

They say when it comes to food we eat with our eyes first. If the same were true for music then MoRkObOt would turn a few stomachs, what with their alt-caps name being a weed reference away from being an obnoxious teenagers Xbox live gamertag, their love of titles featuring gratuitous O’s (GoRgO follows earlier albums MoRbO, MoRtO and Mostro) and their chosen stage names of Lin, Lan and Lon which sound like they’re made of felt and spend their mornings children the alphabet. It’s a collection of conceptual conceits that, to these eyes at least, are about as appetising as a bowl of Lucky Charms and Lamb Casserole.

Thankfully, said the synesthesiac chef to the confused diners, the proof of the pudding is in the listening. MoRkObOt are a feast for the ears and GoRgO is an effervescent cocktail of metal heaviosity, befuddling complexity and giddy punk intensity. It’s a sound somewhere between Lightning Bolt and Meshuggah, with deliciously heavy riffs played in time signatures seemingly designed to bedevil metal crowds and keep them guessing as to when to bang their heads. ‘Kogromot’ is noise rock as guerrilla warfare – you’re never sure when the attack is going to come or from which direction. Even simple breakdowns come with a beat added or removed when you least suspect them. Trying to get a handle on what you’re hearing is like trying to get your footing while some bastard keeps yanking at the rug you’re standing on.

The three piece eschew guitars altogether, preferring a twin bass assault. Sometimes they play like a typical power trio with one bass playing melody while the other stays true to its bassy self, but often crash they grind together creating a dissonant, almost mechanical cacophony. Towards its end listening to ‘Kologora’ is like standing in the middle of a factory full of malfunctioning machines. But however discordant it threatens to get drummer Lon pulls it altogether with the consistently unpredictable and never less than breathtaking drum clinic he puts on throughout. This record is going to keep many a budding sticksman up at night trying to work out what in gods name he’s doing and how it can possibly work.

Whilst there is variation on display – take the comparatively straight forward riffwork of ‘Gorokta’, which sounds like it’s on the verge of toppling over at any moment, or ‘Krogor’, which I believe is what it would sound like if you tried to dissect a circus –  GoRgO is fairly relentless stuff. By the time ‘Gorog’ comes along to bring the pace right down to a more creepy, unsettling sound, all ominous bells and howling winds, deconstructing itself until only silence remains, you might need a lie down. There’s only so much of this the mind can take – no wonder they wound up giving each other alliterative names and started throwing more O’s about than a food fight in the spaghetti hoops factory. The ever twisting world of MoRkObOt is, perhaps, not a place a sane mind would want to live in. But it’s well worth a visit.