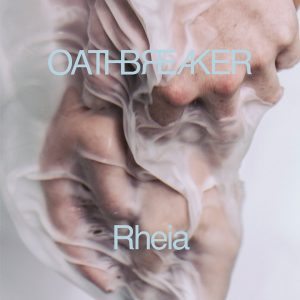 Today I review Oathbreaker’s Rheia, releasing via Deathwish Inc. on September 30th. Rheia is the follow up to Eros/Anteros, which was released in 2013. Oathbreaker are comprised of Lennart Bossu (guitar), Ivo Debrabandere (drums), Gilles Demolder (bass), and Caro Tanghe (vocals).

‘Second Son of R.’ – The speed and attack of Lennart’s guitars and Ivo’s drums, combined with Caro’s vocals, creates a terrible concoction. As I read the lyrics while listening, my inner child is screaming all through it. If I had a dollar for every time I felt “Don’t make me pity you in the end”… The bridge that contains these lyrics is beautiful, depressing, and wonderful. The guitar tone is crispy and dirty, but all the notes sing like bells.

‘Being Able to Feel Nothing’ – The music backdrop is fantastic. Solid, well-mixed instruments where nothing is lost in the mix or stands too far out in front. I love how Caro takes a different vocal approach, throwing off the feel of the song. It’s child-like and innocent but is sharing some nearly lecherous thoughts that don’t make clear if this is a nightmare or fantasy. I’m not hearing Gilles too much in the mix, but I can still hear and feel the bass well. Considering the performance of the music and the vocal qualities of the guitar tone, I think it works well. Lots of time and mood changes, as well. I think they operate superbly as a unit.

‘Stay Here /Accroche–Moi (Hang me?)’ – A well-placed departure and solace from the onslaught. Haunting and sensual – both the guitars and the vocals. A wonderful imbalance of ethereal atmosphere withering around an unmovable heaviness. I think the lines “Hand out your troubles, give me your pain. I’ll plant them next to the thorns in my veins. Tie your limbs to my crippled life. Hang on, I’ll carry you around.” has to be the saddest shit I have heard in a long time. Simply wonderful.

‘Needles in Your Skin’ –This is the most difficult track to listen to. I feel it more than I can hear it – and it’s devastating. If all black metal were like this, I’d listen to it more. Beautifully orchestrated depression. Another curve ball in execution: quiet and subtle. It explodes into blast beats, then shortly after into a harmonious gallop. Gilles stands out much better and Caro is raking the coals with her voice. All I feel is loss, loneliness, and abandonment. It seems like this could be about a drug overdose, but I don’t want to impose. It’s hideous and beautiful.

‘Immortals’ – probably the peak of the album, to me. The beginning sparkles and shimmers, with an undertone of darkness slithering through it (especially when reading the lyrics). Caro is probably one of the best vocalists right now, gender aside. Her range is impressive and she bundles an incredible amount of emotion and character in her performance. I picture a young woman’s ghost, or poltergeist, having flashes of innocence and naiveté, but also blinding rage. The interlude towards the middle of the song is an excellent pacing element. The outro is emotionally powerful and pulls so hard. The layers of guitars, piano, and vocals all whirl together to paint a complicated image of the serene and grotesque; a serpent wrapped tightly around the neck of a suffocated child.

‘Where I Live’, ‘Where I Leave’ and ‘Begeerte’ also make their respective marks. They offer distinct tempo and direction changes, offering more subtlety in each. ‘Where I Live’ brings more of the wild emotional changes established earlier in the album. Beginning slow and measured, but later exploding in another torrent of wailing and full-blastiness from the music. ‘Where I Leave’ could easily be placed in a doom category, where most of the previous material would do well in black metal. Having attention issues, the variety is great and it keeps me plugged in. Fading out from ‘Where I Leave’, ‘Begeerte’ begins with a haunting wall of vocals. More like ghosts. As much as I don’t like to reference other bands during reviews, I get a distinct Portishead feel in this track – but it is darker, more sinister, and pregnant with a lasciviousness that marks its singularity.

Rheia exhibits an intensity both ferocious and lithe, like a lioness whose cubs are approached by an intruder; teeth gnashing, growling, and spittle frothing at the corners of the mouth. But once the interruption is dealt with, she returns to her small pride and lays with them. She licks their heads and purrs gravely, but softly, as they return to their lazy, sunlit afternoon.

Each song is a beautiful tragedy in both songwriting and performance. They cling like claws in your brain, with haunting, reverberated guitars and vocals that lilt and explode. The wailing, screaming, and crooning paint a thorough picture of torment, loss, and desire. I’ve found my own voice in the lyrics, whose addition draws such an awesome depth to this hole.

I wasn’t sure that Rheia would be able to compete with the tightly-wound fury of Eros/Anteros. Where Eros/Anteros demonstrated strength and rage, Rheia elucidates a raw, sinewy vulnerability that took me several spins and readings to digest.

All of those who worked on this record should be proud. It sounds amazing and feels terrible. There are so many juxtapositions between the vocals and the music, which create a harmonious dissonance that causes gooseflesh and standing hairs.

Album of the Year. There. I said it. I wasn’t expecting to be affected emotionally when I started Rheia, but I can’t stop listening to or thinking about it. I hear this music when I wake up, I hear it all day, and I hear it when I lie down for sleep. I’m exhausted, drained, dizzy, and euphoric. Like the fading lines from ‘Begeerte’, “I draw pleasure from it.”