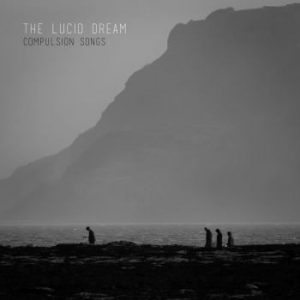 Released on September 23, 2016 via Holy Are You Recordings

As one of the leading lights of the new psych scene The Lucid Dream have always seemed one step removed from the rest of their ilk. Standing apart from the tripped out, almost geek like nature of a lot of bands, they imbue a Northern attitude mixed with a football casual dress sense whose very normality goes against the grain of what a psychedelic band should look like. Indeed, the very term psych is something which causes them chagrin yet as soon as they get in full flight, nothing can match them for pure “out there” abandonment.

The impressive thing about The Lucid Dream is their restless urge to continue to develop and where they once peddled a jangly Byrds like sound on debut Songs Of Lies And Deceit, they almost stripped that back with follow up The Lucid Dream which turned the darkness up whilst introducing an hitherto unseen dub element. Now they return with third album Compulsion Songs and once again push forward with yet more exploration.

Whilst there is no great leap of change this time, what they do is display a real confidence in their music. It’s a confidence which has always been there but never given full reign. Now they let fly and from the krautrock stylings of first single ‘Bad Texan’, its clear that they are reaching a career peak. If third albums are supposed to be difficult, The Lucid Dream don’t show any sign of this bothering them.

Opening with ‘Bad Texan’ is a brave yet inspired choice but also sets the scene for what is under the surface quite an uncompromising album. It also shows the more experimental side of the band who are not afraid of simply letting the music flow on its own path rather than taking in the usual structures. Drifting by on an ecstatic synth sound, the rhythm section pounds out its metronomic beat as if there is no tomorrow. Robotic yet full of life, this move to a dance orientated sound is key to where they head later.

‘Stormy Weather’ is classic The Lucid Dream now which goes to show how much of an impact they have made in their short life. Resting on a throbbing bass and easy melody, it’s jangly sound builds on a nervous eat whilst the melodies draw to mind New Order circa Brotherhood. That they then follow this with ‘I’m A Star In My Own Right’, a dub work out, is a complete left turn yet just like last albums ‘Unchained Dub’, they channel their King Tubby influences into an intriguing moment of spaceiness.

After three songs which break the six minute barrier it’s time for a bit of garage rock as the middle section is taken up with the Love sounding ‘The Emptiest Place’ followed by a blast of white noise from ’21st Century’ which is unlike anything the band have ever done before. Snotty, loud and punky, it’s yet another left turn from the band.

From here its to the big finish and as the electronic beginning of ‘Nadir’ ushers in a creepy sense of wooziness, the song slowly unfurls into something of a heavy beast. A simple vocal line repeats itself as the music trips over itself in the background, just teasing out little moments of melodies before exploding in glorious multicoloured abandonment. It’s the sound of The Lucid Dream in full flow as they turn up their guitars to ten and head for the stars. They could continue doing this until the end but instead they have the new found confidence to reign themselves in adding fascinating layers to the music.

They don’t stop there though and as if now fully channelling that earlier sound of New Order and turning it into their own, ‘Epitaph’ lays its claim to being one of the tracks of the year. It’s a stunning eleven minute high which is simply the best thing the band have released so far. It’s a song that lets you loose yourself in its intertwining beats and incessant melody as that once dark dancefloor is turned into a psychedelic wonderland. It’s their Lowlife and Screamadelica rolled into one.

For a band who are continually striving for something different in their music, they remain resolutely grounded enough for a regular following yet have more than enough appeal for the underground set. That crossover appeal can only be a matter of time and in a world where Blossoms are the new psych darlings, it’s crazy to think that a band like The Lucid Dream are not knocking on their door. Compulsion Songs is an album of quite extraordinary moments and signals the moment when a band suddenly knows exactly where they want to be for the foreseeable future. The spark has been lit, it simply needs to catch and this band will fly. Even The Lucid Dream must be wondering how they are going to top this one.