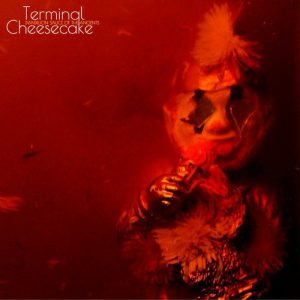 It’s been almost three decades since Terminal Cheesecake launched themselves onto an unsuspecting world, a fact that is bound to make a lot of heads feel very old. For slightly younger listeners (me included) who missed them the first time around their reappearance may well have them wondering why the hell all that Britpop nonsense was such a big deal in the early 90s when we had weirdos like these creating bizarre headfuck noise on the fringes. But those of us who hadn’t even reached secondary school by the time the Cheesecake had split up need to remember that when they formed in 1988 Britain was a very different place. Picture this, if you dare – the country is run by a power-bobbed, steely eyed Tory PM hell bent on implementing a divisive right wing agenda while the Labour party is too busy waging an internal war over just how left wing is left wing enough to mount an effective opposition.

Sends chills down your spine, doesn’t it?

The more things change and all that. But whilst British politics seems stuck in some horrifying time loop we can at least be thankful that in the 15 years since Terminal Cheesecake called it a day the musical landscape has grown to be a little more hospitable for wilfully weird. It’s fair to say that the Cheesecake’s initial run wasn’t as celebrated as it should have been – whilst noted lovers of leftfield nonsense like John Peel and Simon Reynolds hailed their wild, unhinged 6 album run they’ve been largely forgotten by all but a small cadre of believers, and were perhaps in danger of being something of a small footnote in the annals of British rock history. But now there’s a vibrant, thriving underground scene in the UK – we’re lucky to have a number of shit hot noise/psych labels and promoters and festivals active right now. It’s an environment in which Terminal Cheesecake can feel right at home.

And so, following a few festival outings and solo shows – captured in last years rather fine Cheese Brain Fondue: Live In Marseille album – in Dandelion Sauce of the Ancients we have their first studio recording since 1994’s King of All Spaceheads. The band haven’t made it back entirely intact however, with GNOD vocalist Neil Francis having taken over from Gary Boniface. It’s a match that makes perfect sense: the Cheesecake have a good argument for being the missing link between the British psych bands of the 70s and today’s noisier, wilder psych outfits like The Cosmic Dead, Blown Out and GNOD themselves. Both GNOD and Terminal Cheesecake bands share a great deal of DNA, both merrily engaging in genre splicing when the mood takes them and defaulting to a noisy, unhinged brand of psychedelia. Indeed opener ‘Birds in 6/8′ would probably sound like it could have been ripped straight from one of GNOD’s more guitar-centric releases even without Francis’ involvement.

Exclusive Stream of the track ‘Dandelions’:

His integration is helped by Terminal Cheesecake 2.0 abiding by that most prominent psych vocal cliche – no words, sung or otherwise, can be uttered in their world without being drenched in reverb andor delay, echoing off into eternity. It’s easy to sound like your predecessor when you’re both backgrounded and made to sound like your vocals are being piped in from another timeframe. But he gets their vibe too – on the brief but warped (and wonderfully titled) ‘Mr Wipey’s Day Trip to Guilford Haven’, the kind of sick gag track that’d fit right onto one of their 90s records, he quickly gets into the right frame of mind rambling about “the ice cream man with the dirtiest hands” over a deranged circus beat. And his feral screaming on nihilistic noise frenzy closer ‘Lord Jagged (The Chemical Teacake Quintet)’ shows this is not just a nice side gig for him. He’s willing to go all in for the cause.

Elsewhere however there is occasionally a surprising timidity to Dandelion Sauce of the Ancients, with things played a little too safe. ‘Poultice’ is fairly typical fuzzed out psych number that could have been laid down by any number of psych rock bands that formed in their wake. But even when they operate within such parameters they’re capable of showing their pedigree – it may not be innovative but the boys sure can jam. More impressive is ‘Dandelions’, which is on the surface another guitar heavy freak out, but one where the choice of tones, some of which are so abrasive it’s not unlike shoving your ears up against an industrial sander, elevate it into something more transcendental. Creating a psychedelic sound isn’t just about jamming aimlessly for a few minutes – by pushing the sonic envelope to the limits of tolerance they’re capable of shifting your headspace out of its comfort zone better than any sub-Hendrix prolonged soloing can. They repeat the trick to even greater effect on ‘Song for John Pt. 1′, a track which just builds and builds to a monolithic sonic assault of knuckle-dragging rhythms and coruscating guitar supernovas that once it’s over leaves you feeling altered, much like to the moment the credits role on a David Lynch film and you’re not quite sure how reality is meant to work anymore.

No one would blame the remaining members of Terminal Cheesecake if they came out of retirement just to flog some vinyl reissues and claim whatever their alternative kudos can get them. Lesser bands have done so without anyone batting an eyelid. So it’s especially pleasing that Dandelion Sauce of the Ancients sounds like a band not so much interested in cutting a quick, “remember us?” record and sound instead like they’re limbering up for a full on second wind. The fans who stuck around from their initial run might feel Dandelions is not quite as out there as their earlier work – aside from perhaps the quintessentially Cheesecake The Winding Path – and not quite as experimental and willing to forgo consistency to suddenly incorporate dub or industrial into their sound. But they’ve already shown over the past 18 months that they still have it on stage and Dandelion Sauce of the Ancients has more than enough to prove they still have a lot more to give in the studio. Now that they’ve succeeded in burning down the curtain that had once fallen on their career it’s going to be quite the trip seeing where the show goes from here.

Pre-order Dandelion Sauce of the Ancients through here.