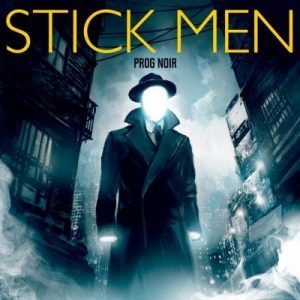 It’s not uncommon for bands – particularly those on the vanguard of a new movement – to shun the labels that attempt to define them. So it’s amusing to see that the title of the latest Stick Men album is fully embracing the genre label of prog rock that King Crimson’s In the Court of the Crimson King arguably created back in 1969.

For the uninitiated, Stick Men is comprised of King Crimson members Tony Levin and Pat Mastelotto on Chapman Stick and drums(ticks) respectively, and Markus Reuter (who may as well be an honorary Crimson member) on his U8 Touch Guitar. But while the prog of Prog Noir is distinctly of the Crimson school – it’s dark, intense, complex and mainly instrumental – this isn’t to write off Stick Men as some lesser spin-off group. They’re their own beast. For one, they create a far more open musical space; a landscape where Levin and Mastelotto can generate a seemingly endless number of grooves and take them as far as possible. Reuter’s role interchanges between generating interesting sonic textures and biting lead lines that carry over the rhythm section.

Prog Noir is itself a departure from earlier Stick Men records, however. The more muscular side of 2013’s Deep – typified by the ever shifting “Nude Ascending Staircase” and “Cusp” – has been left aside for a more introspective, cerebral sound. The opening two tracks – the titular ‘Prog Noir’ and ‘Mantra’ – both do a great job of setting the album’s tone, focusing on ambience and a sense of mystery. There’s a greater attention to song-craft than ever before, the title track featuring some of Levin’s best singing yet.

Not that all the vocals are necessarily what one would expect, as Reuter’s ‘singing’ on ‘Plutonium’ and ‘The Tempest’ is actually spoken. Far from a detriment, the low German baritone perfectly complements the detective noir atmosphere created by the opening pieces and, in fact, these two pieces are two of the best tracks on the album. “Plutonium” showcases the band’s unique sense of humour that’s been around since the soup/supercollider pun on their 2010 debut Soup: the premise being, now that Pluto is classified as a dwarf, what happens to the element Plutonium? Quoting Carl Orff, Yes and Tchaikovsky, the song manages to be amusing, technically challenging, and the ending really emphasises Mastelotto’s ability to fall in and out of the groove at the perfect moment.

‘The Tempest’ succeeds almost entirely upon the production alone. From the suffocated distortion in Reuter’s lead tone, to the unresolved chords in the upper register of Levin’s Stick during the verse, the track conjures up a unique atmosphere unlike any other. Add a punchy chorus featuring both Levin and Reuter on vocals, and you have one of the best and most accessible Stick Men songs yet.

The rest of the album is instrumental (excluding the closing track ‘Never the Same’) and brings the musicians’ ability closer to the forefront. ‘Schattenhaft’ is almost entirely an excuse for Mastelotto to be let loose, the first half a particularly mesmerising display of intricate drumming.

After a brief, serene interlude of ‘A Rose in the Sand/Reqiuem’, we’re introduced to three more traditional Stick Men instrumentals, ‘Leonardo’, the bass heavy ‘Trey’s Continuum’ (presumably a reference to fellow Stick player and King Crimson alumni Trey Gunn) and ‘Embracing the Sun’. While all enjoyable pieces showing off the member’s ability to play with and off each other, ‘Embracing the Sun’ really takes things to another level. As usual, by the end everyone is playing out of sync with the other in the best possible way – a way that is both as enjoyable as it is perplexing.

Prog Noir is by far the most well-crafted and accessible set of songs Stick Men have written thus far. The fact it manages to be so without sacrificing the members’ astonishing musicianship or penchant for syncopation and odd rhythms is a success in and of itself.