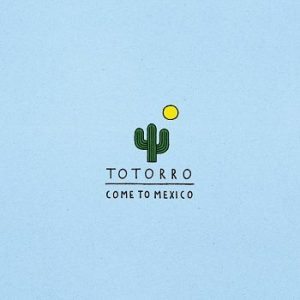 Totorro, from Rennes in France, bring you Come to Mexico; the quartet’s second full-length album, following 2014’s exceptional Home Alone. I’m a huge fan of these guys and the progression they’ve made is evident in their work.

Totorro’s first two EPs, entitled EP and All Glory to John Baltor, released in 2008 and 2011 respectively, are thunderous and often dark Post-Rock, bordering on Post-Metal. Both records are spectacular listening for fans of these genres and I highly recommend checking these out.  Their first full-length, Home Alone, is a huge contrast in sound & style – I found it hard to believe it was created by the same band. In 8 years, they’ve clearly took their time in learning what they want to be and then stuck with it, refined it, and the end result is tremendous.

Their latest project, Come to Mexico, showcases Totorro’s expertise and vast potential; combining dynamic Guitar, fast-paced Drums and pounding Bass to create something so positive and upbeat, you’ll find yourself smiling throughout. Their sound is so clean, seemingly fine-tuned to perfection. They move at a swift pace, balancing charming ambience with their customary, mind-blowing crescendos. The frequent stalls and changes in speed just add to the intensity; nothing short of epic.

The album begins lightly with ‘Brocolissimo’, a short intro which steps up a gear towards the end, before firing straight into second track ‘Yaaaago’; a rapid, complex series of overlapping Guitar sequences that switch from light to heavy in the blink of an eye. Totorro shine when hitting full throttle. Continuing with tracks ‘Trop Fort Jéjé’ and ‘Saveur Cheveux’; both are a fine platform for Totorro to experiment and display their trademark, multi-layered build-ups that lead into a roaring climax. We slow down with ‘Beverly Pills’, which ebbs and flows calmly, with beautiful sounding Guitar, erupting in its second half exquisitely; highlighting once again that when they’re firing on all cylinders, they’re really at the top of their game. There’s a short interlude entitled ‘Ouad & Khaled’ – a tender respite from the rollercoaster first half.

The second half kicks off with the loud ‘Tomate Polisson’, powerfully blistering through intricate walls of sound. ‘100% Repos’, clocking in at over 8 minutes, patiently builds with depth and complex rhythm into a resounding finale, creating the album’s outstanding track. The band break their familiar structure with the gentle, floating ‘Clara Mystére’, which introduces the first real use of vocals on the album, a pleasant touch of French.  We return to the unmistakeable Totorro mould, firstly with ‘Gérard Blast’, bold and relentless, before smoothly quieting to a complete stop – then exploding back into life for a lightning finish. We end on the album’s title track, ‘Come to Mexico’; an uplifting, stunning close to the record.

Totorro have constructed an intelligent, fluid collection of accomplished Post-Rock. It’s simply no nonsense, with no time for gloominess or lethargy; even the more breathtaking, delicate parts are swiftly blown to pieces. Totorro are mastering their trade and if Come to Mexico is anything to go by, these guys have a bright future.

The band previewed the tracks ‘Saveur Cheveux’ and ‘Yaaaago’ amidst their recent tour with Vasudeva during August, which took place throughout the UK and France, including a stop at Arctangent Festival. It’s been a big year for Totorro and it’s about to get much bigger. Come to Mexico is due for release on the 21st October 2016 and the band plan to tour in 2017. We’ll be seeing a lot more of these guys in the near future.