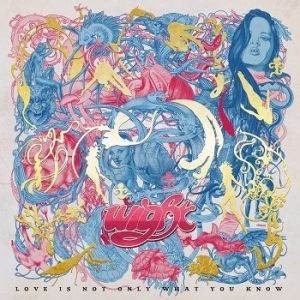 Released on September 16, 2016 via Kozmik Artifactz

Wight aren’t your average kind of band. They may have started out with heavy doom roots, but over the course of their musical journey they have evolved into a completely different beast yet. The hints were there on early albums Wight Weedy Wight and Through The Woods Into Deep Water, but now on their third release, Love Is Not Only What You Know, they have finally succumbed to that thing called funk. Wight seem to have slipped through a hole in time to the dark 70’s as they embrace all those early blaxploitation soundtracks, but also feed into it with the early classic rock of Free and Grand Funk Railroad.

‘Helicopter Mama’ is a good indicator of where they stand right now with its lolloping bass undercut by glorious moments of thunderous guitar. The vocals slip from blues rap to full on melodic singing, but never fall into the trap that Red Hot Chili Peppers fell into. Indeed, your first thought may be that band, but aside from having a funk background, they sound nothing alike.

Funnily, it is 90’s rock band Reef who come to mind and before you all go running for the door this is not actually a bad thing. Whilst no-one listens to that aforementioned band any-more (although in reality they did have one or two good songs), it is their unashamed retro-ism and belief in what they were doing that carries on here. Look at the way ‘The Muse & The Mule’ simply shakes its tail-feather and try not to throw some awkward soul shapes whilst swinging around an air guitar.

Of course, at the heart of it is the moments when they simply lose themselves in the music and ‘Kelele’ is a prime example of the way they can take a simple beat and turn it into a full on work out which twists and winds and feeds into an Afro-centric core without ever sounding like it is appropriating any of those sounds. Instead it is a sense of respect in the music and this feeds into the pure joy they express when in full flow.

For one of the more delightful and unusual albums this year check this out. If it doesn’t make your body move and your heart thump then you must get yourself checked out. There are sublime moments of melody mixed with some wonderful classic rock and all delivered with a huge order of funk. Wight really are a magnificent band and this album tops off a fascinating career so far. Let’s hope this continues!