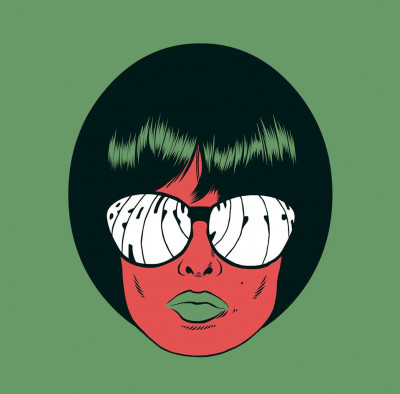 The Beauty Witch on the web:
Facebook |
by Richard Collins | December 21, 2016 | Cosmic Roundup

Sammy puts on INSANE looking nights in Manchester at a night called The Beauty Witch! He puts on similar shit to us but bigger stuff too and we’re well fucking jel! I met Sammy at Red Sun Festival this year and again at CHUNK in Leeds, He’s awesome and here’s what he has to say for himself.

Hi Rich! I’m all good thanks.

(((o))): Tell us a bit more about The Beauty Witch, how long has it been going? How did it start?

It started in early 2013, or that’s when I started sending emails to bands for shows. I worked at (the sorely missed) The Roadhouse music venue for years, and whenever I was not there I was going to gigs all the time, so I thought I would give it a go.

First few months were surreal really. Conan was the first show I ever confirmed. Dead Meadow was the first band from the states I ever did, and I had loved both those bands for years. I put on the Fat White Family’s first show in Manchester in between those two and their massive now, and they were some of my first shows. Just a crazy introduction to it, and I like to think I have not looked back since then.

Its important to remember that when your a few years down the line and The Heads are headlining one of your shows, or you have a band from the other side of the world playing one of your gigs and everyone watching them is into it. I never thought I would be doing anything of these back then.

(((o))): You seem to put on a mixture of huge touring bands and more niche UK weird bands. How do you put together your line ups?

I personally think I have not done as many UK bands as I would have liked to be honest for one reason or another. I am hoping to do more of those bands next year. I do like to try and find a balance, simply to satisfy my own curiosity. I also thought it would be great to give the people going to the shows something different each time, and for the most part I think I have done that.

I have been really lucky to put on really amazing bands like Yob, The Heads, Earthless and others since I started that always bring a good crowd (along with being amazing gigs as those three were) and I want to carry on doing those shows. However, I am still trying finding new music, and the buzz you get when you hear a new act that blows your mind and you start sending emails because you can not wait to see them is one of the best parts of doing this.

(((o))): You put on The Body this year who are like my favourite band, how were they?

Really great people, and just one of the best band around at the minute.

I think so. Obviously Manchester is a renowned city for live music and acts, but there seems to be a really diversity of stuff coming from here at the minute. As is the case with every major cities at the minute, gentrification and local councils that give no backing to music venues is an ever growing problem, but there are new spots and places to play popping up and the quality of the acts and the promoters who work at this level only seems to grow.

I was lucky enough to put on a band called Stupid Cosmonaut’s first ever gig here recently, and I am really into them at the minute. They already have a really strong and extensive output for a band as new as they are, and I can not wait to see them again.

Screw you Collins! I’ll give you three.

I did three shows in a row on the May bank holiday. Follakzoid first, followed by Kikagaku Moyo, and finishing with Part Chimp, PIgsx7, Klaus Kinski and Groves. To have them one after another was something else, and to end it with a massive dose of Live Chimp was really special.

Two really stand out. Saw Lydia Lunch in Berlin in March which was fucking amazing. A close second was Anna Von Hausswolff supporting Swans a few months back. One of the most unnervingly hypnotic things I have ever seen.

Not been to too many this year, but Liverpool Psych Fest was cool, and Damnation was worth it just to see Ufomammut melt everything.

Human Condition by Bruxa Maria is my album of the year. I called it a mix of Butthole Surfers with Part Chimp’s amps, and I am sticking to that.

the body – Phantom Of Liberty

Oozing Wound – No One Deserves Happiness

Carla Del Forno – You Know What It Is Like

Grave Lines – Welcome To Nothing

Its a manic start to next year. First I’ve got Camera in a tiny venue to start off the year, followed by PIgsx7 album tour a few days after the LP comes out on Rocket (with the excellent Tough Tits and Locean in support) and at the end of the month I am doing Oathbreaker at The Star and Garter.

Got loads of shows to announce in the new year that go all the way up to the summer. I have been flirting with idea of releasing something, so hopefully I’ll be looking further into that as the year goes on.