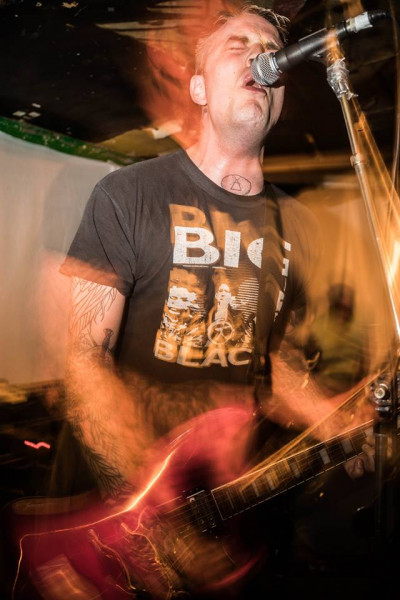 I recently found out Silent Front had been going 20 fucking years, that’s mental! Everyone was in a band in school but imagine you never broke up and just kept doing it, what an amazing story! Here’s what guitarist/vocalist Phil had to say about it all.

Hey Rich, a bit crumpled around the edges but ain’t nothing I can’t iron out. Thanks for having me.

(((o))): Silent Front have been going 20 years. That’s absolutely mental, how have you done this when most other bands split up?

Haha it is strange, it only feels like yesterday I met Russ in geography class haha. Time is a weird made up concept I guess. I think it’s quite simple really, and you have to ask yourself what your doing it for. If you find someone that you connect with in a deeper way, especially with playing music, I think it tends to be a good thing to try and hang on to that.

I’m not gonna lie it wasn’t easy, Gareth is our 7th drummer, most people can’t hack playing as much as we do and spend time away as much as we do/did. It’s really only felt like a proper band since he joined. It did slow us up some what in our younger years. Over the years I’ve found with most break ups it’s to do with ego, and what they really want out of it. Me and Russ, and for the past 7/8 years Gareth, always kept our focus on the music, whatever else happens is a bonus and ultimately out of our control. We control what we play and how we go about it. We do it as frequently or infrequently as we feel. I think when you view music like a life journey rather than a goal, there’s a certain amount of fuck you about that. And to me that’s punk. We do it when we wanna do it. If people wanna jump on, we got a warm spare seat. Actually there’s 3 spare seats in the van.

In the past we’ve actually heard bands say things like “well if we don’t make it by July we’re gonna break up” I mean even the words “make it” make me piss myself hahaha! What are you, in Fame or something? I mean what are you in it for, music or getting your face on a billboard. You gotta strip that shit back, cos the moment you take your eye of the core of what your doing, it’s gonna fail every time. No matter what your doing. I don’t have time for someone who thinks it’s all about them. I’m here to fucking play my arse out not have my ego stroked. It’s a team effort and everyone has a job in a band. Making music or playing live together being the main two.

I think for us, it was such a great way to team up with other bands we love and respected and had similar ethos to us. It basically stems from when we first started touring uk/Europe about 12 years ago and we were trying to get out there a bit and also start a small scene of our own in SW London. We’d contact bands that we liked from out of town and ask them if they wanted to do a show swap and make a weekender out of it.One show in their town and one in ours and often one else where if we could get it.

That way we could spend some time together and bond up a bit. Which often lead to a split. Not to name drop but Shield Your Eyes were very much a part of that with us and had the energy and drive to make something good. There’s a lot of laziness out there and that ain’t us. I think to the point now where we’re being more picky about what we do and who with. Rather than, “oh hey wanna do a tour?” But we have to book the whole fucking thing.

People sometimes comment on why we have limited albums and loads of splits. That’s simple too, we’re a live band. We flourish playing live. I’ve never much liked the recording process myself and I tend to think it takes the life and power out of the music, when it’s natural environment is being played live in front of people where they can take part in it. I mean how excited have you been listening to a record sitting on your sofa, compared to standing amongst other humans getting your bollocks absolutely kicked off by a band? Metaphorically speaking. Also just on a personally level as a band, we’d rather have quality (for ourselves) not quantity. Plus it gives people time to really digest everything that makes up an album. They’re not throw away things, you have to take your time, creating and listening. I’m not gonna force anything for anyone. Man or god.

On a personal level, I can’t keep up with a band that puts out 10 records a year. Again, for us music is a community thing, it basically comes down to a “hey we’re all in this together, let’s party and do something good” plus you can cause more damage that way. More than ever now we need to damage the things that are becoming the norm. Put the iPad down, wake up, and come see something real.

(((o))): You’ve toured Europe relentlessly playing all kinds of dive bars and squats. Talk us through some highlights.

Jesus Mary and Joesph, that’s a question. There’s too many. But just to stress it’s all run and put together by amazing positive people. One in particular comes to mind. I’m just saying Germany, In a squat, with only power for the venue floor where the support band was a guy playing guitar along to a laptop playing dubstep. It was a show after a really heavy night and drive, pretty massive venue compared to the crowd size. We were tired and used all our energy playing and just wanted to sleep. It turns out the floor we were sleeping on was 3 floors up and there was ZERO light. The guy gave us a kinda wind up torch but it had a clicker instead, so you had to continuously press this thing in and out and the light would come out in bursts. So as we made our way up this run down abandoned building in bursts of light, we followed our instructions to the room, which we went into in a hurry in pretty much pitch black and locked the door. We each took a mattress and bedded down. All I’m saying is when we woke up in the cold morning light (and it was cold) and got up and looked at the mattresses we slept on and it looks like they’d been taken out of a skip that was used to clear a old people’s home!

My favourite quote that sums up a touring DIY band comes from a friend of mine when we toured with is band (no names mentioned) and he was on the phone to his missus. She was basically missing him somewhat (which is natural) and I think was making out like he was partying, having a amazing time and not missing her and his response to that was “love, you didn’t see the toilet I had to take a shit in last night”. That to me is touring summed up.

(((o))): How does the underground music scene compare between now and when Silent Front first formed?

Well we were pretty young, 13 to be precise, when we first started so it mainly came down to not being connected. But as we went along and worked hard we gained momentum. I think the main thing I noticed and the struggle we had is most people putting on the kind of shows we wanted to play were either a lot older than us or there was still very much the attitude that DIY punk is fast three chord music and not that experimental. But I guess it’s like anything as you grow and get better things around you do too. I’m so so so lucky to be around all this and how flourishing, inspiring and creative it all is. And such great great nice level headed people with good attitudes. I’ve made some very very good friends from playing music and had life changing and affirming moments. And continue to do so.

Easy, supporting UNSANE. for me that’s a life marker. From watching Alternative Nation on MTV with Russ at 14 and having my tiny mind explode to sharing a stage with them. Gold.

As we all know 2016 has been pretty shitty on all counts. My highlight, eating about 3 space brownies and seeing Yob at The Scala. I was taken to a different dimension that night. They were amazing.

Defo has to be Sin Eater. A big old field, two stages, a pub and a fuck ton of top quality rad DIY bands (which we were lucky enough to play along side) and people, and a pagan ritual thrown in there too where we burnt everyone’s sins which were all written down on paper. All run by the power couple David and Liz from Lancashire and Somerset dance and song society and their team of friends. A cracking 3 days. My liver still hurts.

Well for me there’s not much that I’ve noticed or has really grabbed me this year and I have quiet varied taste and something really has to be special for me. Saying that I do own a lot of shite haha. Plus I fucking hate hype. Like something because you like it, not cos your mate from Dalston does;-) anyway I digress.

Having said that here’s 3. Art Of Burning Water- Between Life And Nowhere. Mortichnia- Heir To Scoria And Ash. Death Pedals – Meat House.

Well for SF we’re currently writing another full length, half of which is probably gonna be quite a chilled affair, and gonna put my blues driver away for a bit. We wanna experiment with more jammed out quiet songs. Mix it up a bit. Maybe even sing a few melodies;-).

Also I think we’re trying to work out tours with Action Beat in Scandinavia and somewhere else with Broker. Plus my other band (Deadwound) which I play guitar in are releasing our first ep January 1st on Black Bow records which I’m very excited about.

Thanks Rich. You bloody living legend.