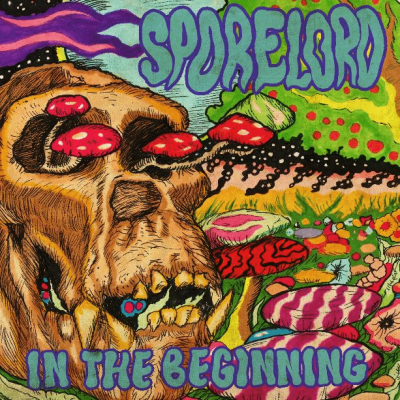 In the Beginning by Spore Lord

Let’s be blunt about this: instrumental stoner bands are about ten-a-penny right now. And that’s after the post-Brexit currency freefall – back when the Pound was riding high a penny could have bought enough confused looking bearded longhairs to stage an entertainingly shambolic five a side tournament. The mailbox at Echoes and Dust towers (which is absolutely a real place) is constantly stuffed full of records by enthusiastic heavy bands with a few ideas and no singer. Most of them have names a lot like Spore Lord and are adorned by record covers every bit as cheesy and garish as that monstrosity up in the corner there.

And why shouldn’t there be so many? It’s grand old time to be in a stoner band. It’s never been easier to get your stuff on record and send it out to the masses. And with an undying stoner scene that spans the globe you might just rock your way into seeing the world. The trouble is that as much of a blast it is banging out a few big riffs and recording them with your mates doesn’t always translate to fun for the listener. Which leaves me with a riddle to unravel: what is it about In the Beginning, the instrumental riff-o-rama from Atlanta, Georgia upstarts Spore Lord, that makes it so much better than just about every other similar release this year?

As with any three-piece instrumental stoner band – especially one given to numbering their tracks rather than using actual titles – the shadow of Karma to Burn looms large. And there’s certainly a lot of Wild, Wonderful Purgatory-era Southern American grit to Spore Lord’s sound, albeit with a slightly more Melvins-ish flavour. But there’s impressive versatility on display too, best illustrated by the moment where ‘III’ stops pin-balling between good time stoner-rock and surprisingly hard edged metal (likely aided by early Mastodon producer/engineer Matt Washburn) and ‘IV’ barrels into its straight into crust-edged punk rock. Indeed they often lean closer to metal than the psychedelia that album art might suggest; slow shredder ‘V’ brings to mind Down or Wiseblood-era Corrosion of Conformity.

Despite not having a vocalist their songs follow a neat and catchy verse-chorus-verse pattern, as if ready for a singer to be parachuted in at any moment. Though it’s hard to think of one who’d do these songs justice. And it’s not like one is really necessary: Dan Giampietro’s guitar work seldom fails to impress and the drummer, Cam Barnes, has a knack for knowing when the attention might wander and injecting an explosive fill or switching things up. And the album breezes by long before there’s time to get bored, though the end could be sequenced better: ‘VII’ is a perfect album closer, leaving nowhere to go after such a rousing, hell fire, rollercoaster-into-the-heart-of-the-sun finale. After which ‘VIII’, as fine as it is, is a bit of an anti-climax.

The answer to the riddle is a simple one: they’re just really damn good at creating no frills, no filler rock/metal songs. Just the riff, the whole riff and nothing but the riff. Anyone with a fuzz pedal and a few friends can put an instrumental stoner-rock/metal record out right now. And that’s great. But it’s oddly comforting to know that it still takes some weird sort of alchemy to do it right. And Spore Lord, my friends, more often than not, do it right.

Listen to the exclusive album stream of In the Beginning here: