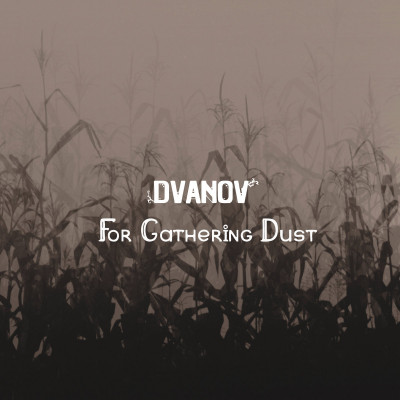 For Gathering Dust by Dvanov

Now it might be argued that one way to get your record some attention on this website is to put ‘dust’ in the title and, by extension, to also put ‘echoes’ in it too (our readers are interested in both phenomena). This may well be the case, and who am I to question the higher alien minds that run this site. I’m sure Dvanov had exactly none of this in mind when pressing their latest recording. You remember Dvanov don’t you? Hailing from St. Petersburg, Russia? We quite enjoyed their EP The Edge Of The Field, released last May. It was nice indie rock with shades of traditional Russian folk and a dash of psych. I expected more of the same when, in their great wisdom, the higher alien minds that run this site sent the latest Dvanov album to my inbox.

To my surprise – my very pleasant surprise – I found an record in which the band had embraced a larger more epic sound, a sound that drew heavily from psych-rock, and with some very satisfying gothic-rock flourishes that put me in mind of Siouxsie and the Banshees in their pomp (ask your mum).

Russia it seems has some very interesting bands bubbling away under the surface at the moment (check out our recent review of Gnoomes latest.) and – I suppose – it’s only a matter of time before more of them start making their way through the same door that Iamthemorning have so effectively kicked open in the last couple of years. Yes, at times Dvanov lack some of the charisma of Marjana Semkina (but she’s a hard act to follow, frankly), but they do make up for it in dark, urban, sophistication; a seedy glamour which contrasts nicely with Iamthemorning’s faerie glade magick or Gnoomes glorious bombast.

What comes through in the music on For Gathering Dust is a strong sense of songwriting and progression that highlights real quality in both playing and production. There’s also a strong sense of Russian identity either overtly displayed in the song titles – ‘Central Russian Night’ or more subtly in the musical arrangements found in ‘Sowing Song’ or ‘Blood’ which pull on a folk music themes whilst remaining contemporary in sound. There are also some great rockers here too ‘Common Instincts’ and ‘Family Tree’ both harvesting a hard sun-baked psychedelic dynamic that soars out over The Steppes.

Some might think it’s a new thing to reach out to Russia, but the underground music scene – as you will know dear reader –  is a very welcoming place and can build musical ties that bind stronger than any here-today-gone-tomorrow autocrat; I think it will be very welcoming of Dvanov’s sophisticated rock.