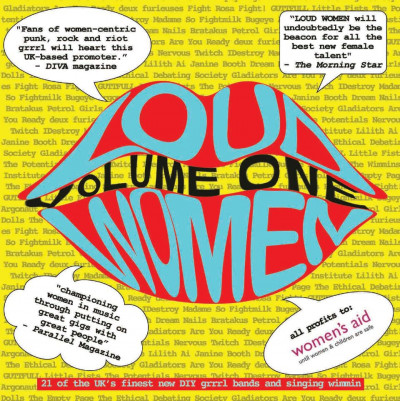 There has been a lot of talk over the last few years about the imbalance of Festival lineups where female musicians are almost noticeable by their absence and unless you’re a particularly unaware straight white male it’s obvious-as the Guerilla Girls and others have repeatedly pointed out-that western society/culture/art is shaped by sexist, racist, heteronormative attitudes. Enter Loud Women, a DIY collective that started in late 2015 to champion women in music primarily through putting on gigs around London. Last September they hosted the first Loud Women Festival at T. Chances, I went down because Petrol Girls were playing and expected my usual Fest experience, you know, a couple of other bands that are really good and loads of bands that are fine but not really your thing. I was completely wrong! This was wall to wall quality punk/garage/rock, with a smattering of acoustic sets.

So, 2017 and along with the gigs and another Fest later in the year Loud Women have come up with a compilation album, LOUD WOMEN Volume One, twenty one tracks by female fronted bands and female musicians. The predominant style is punkish which reflects LW’s ethos and makes for an exciting, energetic aural experience.

Now the tricky bit, how do you review 21 tracks without skimming over them or boring people who can’t actually hear what they are reading about…OK, I will pick out my particular favourites which will in no way imply that these tracks are actually better than the rest and in fact when you buy this excellent album you’ll wonder how I missed out…(insert your favourite).

Oddly three of the first four tracks are by bands I know and like already, ‘DIY’ by Dream Nails is catchy pop punk (positive) about female capability and personal development, Petrol Girls track ‘Touch Me Again’ is melodic hardcore dealing with sexual harassment and assault, ‘Audrey’ by DOLLS is psych garage about something (possibly) vaguely dark. All three tracks are excellent along with Bratakus’ ‘Pollution Evolution’ which is catchy, raw immediate garage punk. The Empty Page is a change of tack into quality 90s type alt/indie rock and it’s excellent; lyrically incisive and intelligent.

Yeah I know that is all of the first five tracks listed as highlights but whoever decided on the track ordering got it off to a very good start!

‘Poor Liam’ by The Ethical Debating Society is good Undertones style punk, next up is Gladiators Are You Ready, drastic tempo changes around a great riff-sounds like it’s held together with sellotape and chewing gum, I like it. Next up is ‘Out Of My System’ by Deux Furieuses which strangely reminded me at times of The Foo Fighters but despite that is really very good. Fight Rosa Fight; great pissed off punk-they were great at LW Fest and this track does them justice.

GUTTFULL, Little Fists, The Potentials are all good, the first includes sax, always a plus. The Nervous Twitch track ‘Something Wrong With Me’ stands out with a catchy 60s garage vocal/keyboard thing going on, but the next track that really does it for me is IDestroy’s epic rock, this is air guitar music at its best!

Where are we up to? Track 15. Madame So, ‘Black Is Beautiful’, this is really very good indeed! Multi layered pop rock, great languid vocals, chiming guitar, inventive, captivating.
Fightmilk, Bugeye, Argonaut are again all good indie/punk with some insightful, intelligent lyrics, they’re followed by The Wimmins’ Institutes’ ‘Nando’s’, which reminded me of ‘Toast’ by Streetband for some (unknown) reason, but much, much better!

The penultimate track is ‘Riot’ by Lilith Ai, I caught her live last year and this song is as good as I remembered it being.

Last up is a spoken word track ‘Real Rape’ by Janine Booth which explores the issues also confronted by War on Women in ‘Say It’, the contradictory, excusing, victim blaming attitudes held by parts of society towards rape.

Dream Nails, Bratakus, Petrol Girls, DOLLS, The Empty Page, IDestroy, Madame So…21 tracks that are varied, intelligent, feminist. Every track on this album is at least good and evidence that grassroots rock is in a very healthy state. If you read ‘Girls To The Front’ by Sara Marcus and wondered what happened subsequently or just like garage and punk do yourself a favour and get this.