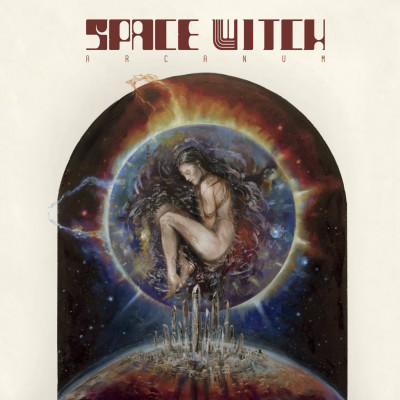 It must be something they’re putting in the weed these days. This year has seen a small surge of doom bands eschewing the tried and tested occult/horror/general misery themes the genre usually produces and instead looking towards the stars for inspiration. And not just in a 2am, red-eyed, Carl-Sagan’s-Cosmos-on-Netflix sort of way. In the first half of 2017 we’ve already had stellar (pun intended) albums by Vinnum Sabbati, Spaceslug, Hexer and Mars to name but a few. Maybe they’re all thinking this would be a good time to lift off and leave planet earth behind. Who could blame them? Whatever it is that’s going round Space Witch, hailing from the exotic banks of Stoke-on-Trent, have a serious case of it.

What’s so cosmic about them? Well, their brand of intergalactic doom often takes the form of suitably tar-black sludge riffs being hammered into oblivion with a healthy dose of 70’s sci-fi synth shenanigans burbling and droning over it. At times the quarter hour long opener ‘Cosmonoid’ sounds like they’ve set a BBC Radiophonic Workshop CD going while they bust out their Sabbathian riffs, or like a down on his luck Jean-Michel Jarre is desperately trying to record an album while a demolition crew swings wrecking balls into his studio walls. It’s hardly the most subtle of tricks but it’s an undeniably potent combination, the repetition of the thick dirt-low grooves providing a perfect launch pad for the retrofuturist synth noodling. It’s a sound easy to lose your head in while the songs lengthy running time ticks away. And just when you may worry they don’t have anything else to offer they switch up the pace half way through, going into hyperdrive with some a huge rolling riff and ra-ta-tat snare action. It’s a sensation not unlike barrelling face first into a black hole, naked, shortly after a hot bath.

Closer ‘Battle Hag’ bookends the album with a similar if slightly faster paced slice of instrumental celestial fuzz, straying into Remission era Mastodon territory at the peak of its barrage. On the intervening 2 tracks Space Witch show their versatility, changing shape repeatedly and adding vocals for the first time. They sound a little unconvincing at first on ‘Astral Genocide’, which is unfortunate as they come shortly after a compelling back and forth between almost jazz-like light breakdowns and club-swingingly primitive sludge riffage. It’s like watching Space: 2001 in reverse, starting with hyper-intelligent aliens and ending with Neanderthal bone smashing. Despite being the albums shortest song it’s packed with the most ideas, ending in a white heat blastbeat burnout. The vocals work much better with ‘Hex Solaris’, coming across more deranged Space Preacher than Space Witch, sounding like an incantation to call forth some galactic terror. The song unfolds over a number of passages in turns meditative and crushing before returning back to those portentous vocals.

Arcanum is a much more varied record than it may initially seem, but it’s still a Ronseal sort of deal with Space Witch – the name tells you more or less all you need to know. It doesn’t all work, and there are a couple of instances where even the baseline riffs-and-synths combo doesn’t quite gel, instead coming like Klause Shulze accidentally wandered into a Ufomammut practice session and just started playing over them. But in the moments it clicks it’s a singular trip that makes good on its promise, showing impressive range, as trippy as it is heavy. It’s hard to think of another cosmic doom band out there who embody that description as well as Space Witch do. For now at least – stargazing doom might be a genre unto itself before we know it. After all we’ve seen far, far sillier sub-genres crop up in the metal world. In the end we’re all banging our heads in the gutter. But some of us are flicking our horns up at the stars.