(((O))) : Cavernlight – As We Cup Our Hands and Drink From the Stream of Our Ache 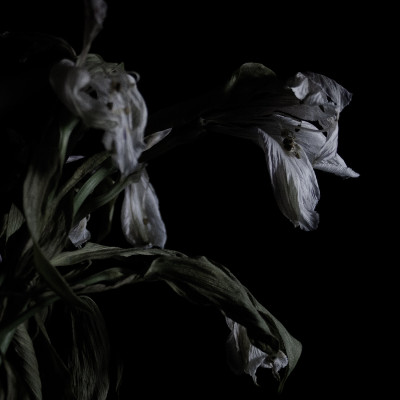 A deep breath, a heavy sigh. So quickly fades the light.
Consumed by enduring shadow. So dark, the wooded path at night.
A foe without form, without mass.
No throat to which my hands may tightly grasp.
Truth absolute is found in the shadows.
Critical realizations.
The winding path that seems endless, barred by terrible obstacles.
Is littered with ways home.
That path comes to an end the second those looming shadows bear the load.
Numerous moments in a life of distress, carried home.

Intense, bleak, hopeless… and scratching at the darkest, most forlorn corners of the mind are what the lyrics from the opening track of Cavernlight’s new release As We Cup Our Hands and Drink From the Stream of Our Ache named ‘Lay Your Woes Upon The Ground And Know That The End Will Soon Swallow You’ exhibit. The titles may be verbose but Cavenlight’s intentions are simple: “write atmospheric dark music about the physical nature of existence”. They succeed wholly at this task. Every aspect of this album is grim and shadowy. The music, the lyrics, the album art, the song titles and the many choking atmospheres all feel like a hundred coffins piled on your chest crushing the air out of your body. It all forms into an impressive, emotive, gut wrenching release.

Cavernlight is the creation of Scott Zuwadzhi (guitar, vocals, noise) and Adam Bartlett (drums, vocals). Their first release, Corporeal, focused heavily upon ambience and atmosphere. The album was an ominous and ponderous entity, their new release continues in this vein with the addition of new band members Patrick Crawford (guitar) and Brandon Pleshek (bass, synths).

The band forges its gruesome sound from several genres, including doom metal, black metal, noise and post-rock. This isn’t an album to introduce anyone to these genres however – it could be a distressful listen to the uninitiated. Cavernlight’s pace is tortured and plodding. The band is patient in their build ups, allowing the listener to clamber along in the gripping and gloomy haze of the many foreboding musical textures. The songs seemingly get more cumbersome and arduous as the accumulation of tones and noise reach deeper and deeper into one’s psyche.

The music on As We Cup Our Hands… is often gradual and alluring as are the vocals. Zuwadzhi sings very slowly, each word bellowed and lengthened with a black metal, raspy intensity that only exacerbates the despondency and mournfulness of the music. The self reflective ache mentioned in the album title becomes a palpable force that crashes in waves of sharp stabbing syllables.

The album is unquestionably dark, but it’s not without significant powerful melodies that are both enthralling and memorable. Sections of ‘Lay Your Woes Upon…’ and ‘To Wallow In The Filth That Dwells Where Despair Is Born’ have stunning instrumental passages of shimmering guitar and suitably sparse drums. The piano outro to ‘To Wallow In…’ ends the track with an unsettling grace. The track ‘Constructing A Spire To Pierce And Poison The Infinite’ opens with some subtle post-rock flair then descends slowly into thick sludgy, doom that is both grim and plodding. The music inching forward, gathering momentum as it falls deeper into its sonic abyss. The standout track for me was the closer ‘A Shell Of One’s Former Self’. It features guests Sarah Green (vocals and cello) and Rachel N. (vocals, from False) with a magical vocal appearance that creates visions grieving angels. The tension mounts steadily until it lets loose midway. The section that echoes: “What fruit, not spoiled, by spite, remains? / What love, destroyed, by undue wrath?” shows Cavernlight at their full-throttle best.

There is so much to like about this release. Whatever sound, noise or sonic texture was necessary to achieve the “atmospheric dark” goal the band included with consistently enterprising and auditorily wicked results. The album may be short for some standards clocking in at around 35m, but I would claim quality wins over quantity any day.

As We Cup Our Hands… is an asphyxiating listen. The album is constricting and uncomfortable like wearing multiple Kevlar vests that are all a size too small. In the harsh, suffocating weight of the music it often feels like one should “abandon hope, all ye who enter here” but there is a satisfaction with the deep emotional level it reaches. Cavernlight have created an emphatically grievous and unapologetically merciless creation. The forlorn guitar, lean poignant drums, unnerving fiery vocals and constant duress of the sinister atmospheres of the music fuse to create a very visceral voyage into Cavernlight’s dimly lit sonic tomb. Enjoy at your own peril.