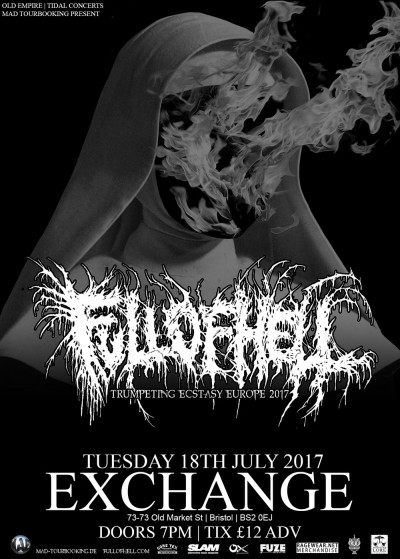 Full Of Hell at Exchange, Bristol

“’See, potential energy’s all about placing something in a situation where it’s teetering, where it’s about to change its state.  Just like when you put enough strain on a group of people, they’ll suddenly explode.  They’ll go from grumpy and quiescent to violent and creative in one moment.  The transition from one state to another’s affected by taking something (…) to a place where its interactions with other forces make its own energy pull against its current state.

Here was a savage Tuesday night line-up, not stuck in a genre rut but with a unifying viciousness and intent to explore that crisis point.  Much as Old Market and the Bristol crowd is practically home, I spent a fair bit of the night feeling out of my comfort zone, as a listener and as a writer, but then what comfort is there in the face of such a range of alienating horror?

No Pulse are a familiar set of faces, local mob playing speedy hardcore punk.  Of course everyone knows punk bands are shit, except when they aren’t.  This lot have sound and songs and rattled through a fistful of stormers.  Harsh vocals and punchy riffs, plenty of momentum.  Sparse and static crowd this early in the evening left me feeling out of step with my head banging and fist pumping but sod ‘em.  Only let up was some nervous and gracious chat from Andy that led into a shout out for those dealing with fascists among us by stepping up to ‘give em a kicking’.  There was some brief shuffling at this point, maybe there was fash in who needed sorting.  NP kept it short but sweet, pushing on until a brief vegan sign-off and they were done.  No hiding from politics with this lot.  This was only their fourth night playing out, probably catch them in some scummy pub soon, ears to the ground Bristol.

Weeping managed to pull off an intimidating soundcheck.  Chug and scream and unsettling swirly noises.  They set up with bass, drums, guitar, and two tables of electro-gubbins, one of which seemed to have a user interface involving chains and a handsaw.  That this was mostly buried in the gloom of the side of the stage suggests it’s for the sound more than the show.  Nods from the band and the set gets going, a constant dizzying cacophony, teetering into builds and blastbeat chaos and headthrashing sections of groove that release only into further disorientation.  Plenty of crisis energy here.  No care for taking the crowd with them, the story is told in its own way.  Looking around, the room had filled up with the after-dinner crowd, and there’s a clear local following in attendance.  Some of their material saw the five-piece returning to a grungy noise rock base, for me some of the more effective passages were when they bedded down in this sound, rather than the ritual freak out, but that’s me.  Total commitment on stage.  As the set progresses noise steps over into malevolent intensity of mid-90s Neurosis, harsh repetitions finally giving way to a dejected squall that marked the end of their set.  It’s for them, not for us, but you can listen in if you like.

Big up the locals!  Nice to start the evening with a couple of great examples of the racket that’s constantly bubbling up in this fair city.  In the venue it’s the usual scruffbags wall-to-wall.  Out on Old Market the usual small time underworld hustlings and bustlings.  In fact one little fragment of that world kept wandering into the venue, fag and can of Blackthorn Super on the go, swiftly and ably steered to the door by the fine fellows of the Exchange, cheers!

It’s a long time since I last saw a Death Metal band, despite friends buzzing about Bristol Deathfest not so long ago, so wasn’t sure what I’d make of Nihility.  Maybe I’ve been missing out.  Anyway all the elements were there – pointy instruments, stop-start chug, tight dual-guitar attack, plenty of shredding, galloping drum-led battle charges, breakdown that sounded for a moment like ‘Beneath the Remains’…  And they do it well.  Their straight metal approach stood out a bit sandwiched between more experimental acts but there’s nothing wrong with good heavy done well.  As things warmed up they summoned up a brief pit.  I was pleased to see the crowd moving (sometimes I’m fed up of glued-in-place headnodding) but this would turn out to be a problematic feature of the night in due course.

Too much caffeine pushed me out the door for a single-minded smoke-and-cool-air break with the headline pairing coming up.

Unfortunately I spent much of Unyielding Love’s set trying keep my footing, my delicious pint of Sacrifice (St Paul’s Cidery , proper), and my teeth.  Some movement I dig, but this pit was marred by certain individuals playing out their dominance games.  Well played Bristol for pulling them up on it, even if it did need doing a few times.  If you are the vest-wearing predatory wanker who couldn’t put his ego aside to watch the fucking band – PISS OFF OUT OF OUR SCENE.  Weeping have written more elegantly about this on their fb but I suppose it remains an unresolved question where the boundaries are around creative violence in a shared space.

Anyway, that aside UL were brutal (my notes say broooooootal).  Insistently hammering chopsy cuts of grind.  Also wielding unusual tools – another saw, and a mic inside the skull of some small horned mammal.  Their set picked up from Weeping’s ritual summoning of all that is filthy and hateful.  Yes I’m making excuses for myself, but putting words to this sort of thing is a losing battle.  All their own descriptors for their sound are hybrids orbiting the black/noise/grind/core/powerviolence axis and they feel they need no less than seven between their fb and bandcamp pages.  And why not?  It’s a cohesive whole, but not genre-d.  The fast grind assault sidesteps into electronic scree and – as the set comes towards its close – even into ‘post’ atmospherics and (to my ears) an extended BM section that I was surprised to find myself thrashing around to.  Certainly not much quiescence left in the room until they’re done and unplug, and we step off from noise into cortisol hush.  Rushing ventilation and the clatter of pack-down.  Wordlessness aside from a few functional transactions around getting off stage.

People drift out to breathe before the last band of the night.

There’s no small amount of anticipation and the room is busy as Full of Hell check and get set.  This is the end of the tour for them, they’ve been doing this for a month with far as I can tell just one rest day. Looks like they’re off home now, and hopefully have something more comforting to return to than the world their music inhabits.

‘We have evil in us.  All of us do.’ announces a sampled voice, and here is a channel for that evil.  To bring it forth and name it, and maybe go home a little less full of hell?  Tumbling chaotic drum fills lurch us from catharsis to catharsis, and this is part of the band’s craft – to balance the churning violence and chaos of our world with carefully structured statements.  Mostly really fast and intense statements for that matter.  They sit back a couple of times into despair doom, again the space and slow-down resonates more with me than the fastfastfast, but it’s clear that Full of Hell aren’t going to settle down here for long.  They seem unbothered about using or not using any of the genre tropes they might find themselves aligned with, riffs and rhythms are picked up and chopped to bits and repurposed in the search for something ever more fierce, ever more alienating.  But we are carried along with that force, it is our own alienation served up here and the crowd feels it and roars back rage and joy.

And in a world where I cycle back through plastic fumes vented out of warehouses, and past the evicted squat where now they pay one equally destitute security person to sit up all night to keep the homeless out, who can argue with a statement of ugliness?

Back to my fringe where there is more hopeful music happening as we cling to the crumbling cliff of the city.